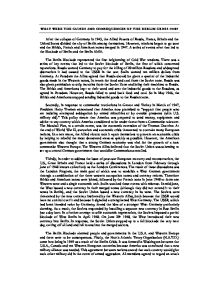 What were the causes and consequences of the berlin crisis 1948?

WHAT WERE THE CAUSES AND CONSEQUENCES OF THE BERLIN CRISIS 1948? After the collapse of Germany in 1945, the Allied Powers of Russia, France, Britain and the United States divided the city of Berlin among themselves. However, relations began to go sour and the British, French and American zones merged in 1947. A series of events after that led to the Blockade of Berlin and the Berlin Airlift. The Berlin Blockade represented the first heightening of Cold War tensions. There was a series of key events that led to the Soviet blockade of Berlin, the first of which concerned reparations. Russia wanted Germany to pay for the killing of 20 million Russians and widespread destruction it had caused to the USSR in the war. Stalin wanted ten million dollars from Germany. At Potsdam the Allies agreed that Russia should be given a quarter of the industrial goods made in the Western zones, in return for food and coal from the Soviet zone. ...read more.

The result of these discussions was the London Program, the main goal of which was to establish a West German government through a combination of the three western occupation zones and currency reform. Therefore British and American zones were joined, followed by the French zone in June 1948 to form one Western zone and a single economic unit. Stalin watched these events with mistrust. In mid-June, the West issued a new currency in their merged zones (although they did not extend it to their zones in Berlin), and the Soviet Union issued a new currency in its zone. The Soviets were threatened by the new currency instituted by the Western Allies, both because the USSR would have no control over it and because it signalled a strengthened West Germany. The USSR, which had been invaded twice by Germany, found the idea of a stronger West Germany particularly alarming. ...read more.

The Russian zone in Germany became the German Democratic Republic led by a communist, Walter Ulbricht. In response to West Germany joining N.A.T.O., the Russians formed the Warsaw Pact. This was also a military treaty in which the Communist countries of Eastern Europe (and later China) all agreed to help each other - and the Soviet Union - in the event of armed attack from the West. Later, in 1954, the West formed the South East Asia Treaty Organisation (S.E.A.T.O.) which was aimed at preventing attacks by communists, and also in 1959, they formed the Central Treaty Organisation (C.E.N.T.O.) helping prevent the spread of communism in the Middle East. So after the Berlin crisis, East-West relations entered a deadly new phase. On the one hand, the Soviet Union had exploded their first atom bomb late in 1949 (much sooner than the West had expected) and 350 000 American troops still remained in Western Europe. The whole world was now divided and was on the brink of a nuclear war. ?? ?? ?? ?? ...read more.