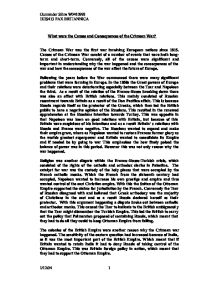 What were the Causes and Consequences of the Crimean War?

What were the Causes and Consequences of the Crimean War? The Crimean War was the first war involving European nations since 1815. Causes of the Crimean War consist of a number of events that were both long-term and short-term. Conversely, all of the causes were significant and important in understanding why the war happened and the consequences of the war and how the consequences of the war affect the future of Europe. Following the years before the War commenced there were many significant problems that were forming in Europe. In the 1850s the Great powers of Europe and their relations were deteriorating especially between the Tsar and Napoleon the third. As a result of the relation of the Franco-Russo breaking down there was also an effect with British relations. This mainly consisted of Russian resentment towards Britain as a result of the Don Pacifico affair. This is because Russia regards itself as the protector of the Greeks, which then led the British public to have a negative opinion of the Russians. This resulted in the renewed apprehension at the Russians intention towards Turkey. This was opposite in that Napoleon was keen on good relations with Britain, but because of this Britain were suspicious of his intentions and as a result Britain' s relations with Russia and France were negative. The Russians wanted to expand and make their empire grow, where as Napoleon wanted to restore Frances former glory as the worlds greatest ...read more.

This resulted in Russia invading Moldavia and Wallachia in July 1853 and the battle of Sinope which saw the Turkish fleet annihilated by the Russians which was the commencement of the Crimean War with Turkey declaring war on Russia in October 1853. The War ended in 1856 and the immediate consequences of the war was that even though Britain and France won the war it was a catastrophe for all who were involved and for Britain there was exposure of military incompetence was emphasised and undermined Aberdeen's government. This exposed the long-term neglect of the British army, which was appalling to the public. As a result foreign policy brought down another British government and in January 1855 Aberdeen's government collapsed and the successor was Palmerston by popular acclaim. More immediate consequences of the war were the number of casualties, for Britain it was 22,0001. The war was also a costly one it cost British taxpayers at the time seventy six million pounds. Not all the consequences happened at home, as result of the incompetence and mismanagement in the Crimean war there was an Indian mutiny in 1857 which highlighted the that there was need for immediate army reforms. The mutiny also highlighted the importance of public and health and hygiene and that more qualified nurses were needed so women were encouraged to become nurses, example that was set by Florence Nightingale. ...read more.

This unification consequently was the foundations to the First World War. In conclusion, the Crimean War represented the end of "the Concert of Europe" and that co-operation between the European powers was to be replaced by hostility and aggression towards each other. This introduced "Every nation for itself" feeling and the indication that in the future to come the nationalist view would be potentially dangerous in the future for Europe. The treaty of Paris was a short-term answer to the eastern question. The Crimean war was the pivotal point of how wars were fought and it incentives of modernization warfare and the use of new technology in warfare. As the Austrians had no support from none of the superpowers of Europe it would be very significant implications in the future for Italy, Germany and Europe. As Russia were not concentrating on Turkey no more Alexander the second was now concerned with the Balkans and wanted to give security to the them which resulted in a boost for the Balkan people, however this would be an implication in the future to come. It is evident and significant that the Crimean war was an event that consequences that would in the future be so significant and important just not to Europe but to the First World 1 as well. 1. General Sir Edward Hamley, K.C.B., The War in The Crimea, p. 302 2. Ibid, pp. 459-460 Giles Pope 3. Trevor Royal, Crimea, The Great Crimean War 1854-1856, p. ...read more.