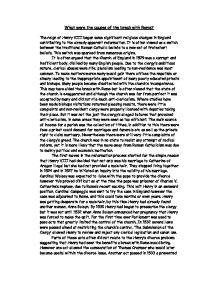 What were the causes of the break with Rome?

What were the causes of the break with Rome? The reign of Henry VIII began some significant religious changes in England contributing to the already apparent reformation. It is often viewed as a switch between the traditional Roman Catholic beliefs to a new set of Protestant beliefs. This switch was sparked from numerous origins. It is often argued that the Church of England in 1529 was a corrupt and inefficient body, disliked by many English people. Due to the clergy's ambitious nature, clerical abuses were rife; pluralism leading to non-residence was most common. To make matters worse many would gain there offices the nepotism or simony leading to the inappropriate appointment of many poorly educated priests and bishops. Many people became disaffected with the church's incompetence. This may have aided the break with Rome but is often viewed that the state of the church is exaggerated and although the church was far from perfect it was accepted by many and did not rile much anti-clericalism. Where studies have been made bishops visitations returned pleasing results, there were little complaints and non-resident clergy were properly licensed with deputies taking their place. ...read more.

This left Henry in an awkward position, Cardinal Campeggio was sent to try the case in England however the case was adjourned to Rome, and this could take months or even years. Henry was getting desperate for a male heir, by this time Henry had already found another women, Anne Boleyn. By 1530 Henry had begun to pressurise the clergy but it was not until 1532 when Anne Boleyn announced her pregnancy that Henry was forced to make the split. For the first time ever Parliament was used to pass acts that greatly limited the control of the church. In 1532 several laws were passed aimed at restricting the church's control, 'The Submission of the Clergy' allowed Henry to review and reject any clerical legislation and canon law. Parts of these acts often did not relate to the Henry's divorce problem suggesting that Henry had seen the benefits a break with Rome would bring. However one act allowed the consecration of Thomas Cranmer who would later become useful within the divorce issue. ...read more.

A. F. Pollard believed it was not a question of if but when Henry would break with Rome. The greatest conflict with the church arose of Henry's divorce, although Henry tried to act tolerably for several years he was eventually forced to take action. Whether this was due to his desire for a divorce, his love for Anne, his want for a male heir or the pressuring protestant factions is unclear. However the reformist group surrounding Henry undoubtedly played a significant part in the break with Rome. This enabled Henry to push acts though parliament as well as the anti-clerical view in England. However it is a well-established belief that Henry did not create a true break with Rome and this was left until the reign of his son Edward IV. Henry never wished to create a break with Rome but was forced too due to his desire for a divorce. Henry was put in a position in which his desire for more power and need for a divorce strained him to agree with his reformist peers. Henry was born a Roman Catholic and died a Roman Catholic; the 'perceived' break with Rome did not change that. ...read more.