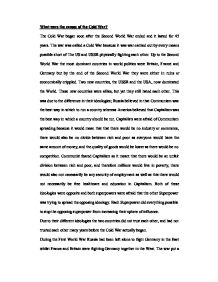 What were the causes of the Cold War?

What were the causes of the Cold War? The Cold War began soon after the Second World War ended and it lasted for 45 years. The war was called a Cold War because it was war carried out by every means possible short of The US and USSR physically fighting each other. Up to the Second World War the most dominant countries in world politics were Britain, France and Germany but by the end of the Second World War they were either in ruins or economically crippled. Two new countries, the USSR and the USA, now dominated the World. These new countries were allies, but yet they still hated each other. This was due to the difference in their ideologies; Russia believed in that Communism was the best way in which to run a country whereas America believed that Capitalism was the best way in which a country should be run. Capitalists were afraid of Communism spreading because it would mean that that there would be no industry or commerce, there would also be no divide between rich and poor as everyone would have the same amount of money, and the quality of goods would be lower as there would be no competition. Communist feared Capitalism as it meant that there would be an unfair division between rich and poor, and therefore millions would ...read more.

Both of the Superpowers were suspicious and afraid of the other Superpower's strength. The Cold War began because of the mistrust between the Superpowers. Another cause of the Cold War was the dropping of the atomic bomb by America this lead to an Arms race between the two Superpowers. Each side tried to get ahead of each other in the arms race - to produce more bombs or better technology. Neither side dared to fall behind or else the other might attack them. Both sides did not attack each other because if they had MAD (Mutually Assured Destruction) if they did attack each other. The arms race was a cause of the Cold War because it increased the feelings of hate and jealousy between the superpowers. When the USA dropped the atomic bomb. Russia realised that she was now weaker than America and she needed a buffer zone to protect herself from attack. Stalin decided that all the countries, which were under Russia's control, during and after the Second World War, should turn into Communist countries, and so - even though Stalin had promised to allow free elections in the countries- he managed to force all the countries which were under Soviet control in Eastern Europe to turn into Communist countries. ...read more.

America on the other hand thought that if she left Germany alone then it might lead to the general public turning to extremist parties for help, like what happened when the treaty of Versailles was signed. Stalin was angry at the USA for providing aid to Western Germany and the Capitalist part of Berlin, especially when the USA introduced a new currency -the deutschmark- into the Capitalist part of Germany to help the economic revival of Germany. In June 1948 Stalin blockaded Berlin in the hope that he would force the allies out of Western Berlin. But the allies were determined not to give up and so they flew in supplies into Western Berlin. The Berlin blockade was a big factor, which contributed to the cold war, it showed the hate of Russia towards America to the whole world, it also showed America's determination and the fact that America stuck to the principles of the Truman doctrine and did not attack Russia. The main cause of the Cold War was the different ideologies between the superpowers and the hate and mistrust which built up between them due to their suspicions of each other. The origins of the Cold war were very old and the hate and mistrust between the superpowers had built up over a long period of time but the first time it was made apparent to the rest of the world was when the USSR blockaded Berlin. ...read more.