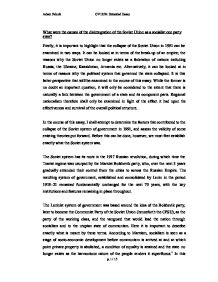 What were the causes of the disintegration of the Soviet Union as a socialist one party state?

What were the causes of the disintegration of the Soviet Union as a socialist one party state? Firstly, it is important to highlight that the collapse of the Soviet Union in 1991 can be examined in two ways. It can be looked at in terms of the break-up of an empire; the reasons why the Soviet Union no longer exists as a federation of nations including Russia, the Ukraine, Kazakhstan, Armenia etc. Alternatively, it can be looked at in terms of reasons why the political system that governed the state collapsed. It is this latter perspective that will be examined in the course of this essay. While the former is no doubt an important question, it will only be considered to the extent that there is naturally a link between the government of a state and its component parts. Regional nationalism therefore shall only be examined in light of the effect it had upon the effectiveness and survival of the overall political structure. In the course of this essay, I shall attempt to determine the factors that contributed to the collapse of the Soviet system of government in 1991, and assess the validity of some existing theories put forward. Before this can be done, however, we must first establish exactly what the Soviet system was. The Soviet system has its roots in the 1917 Russian revolution, during which time the Tsarist regime was usurped by the Marxist Bolshevik party, who, over the next 3 years gradually extended their control from the cities to across the Russian Empire. The resulting system of government, established and consolidated by Lenin in the period 1918-21 remained fundamentally unchanged for the next 70 years, with the key institutions and features remaining in place throughout. The Leninist system of government was based around the idea of the Bolshevik party, later to become the Communist Party of the Soviet Union (henceforth the CPSU), as the party of the working class, and the vanguard that would lead the nation through socialism and to the utopian state of communism. ...read more.

By 1956, the roots of Soviet dissent were forming.14 This open debating of specialist issues gradually widened, as it became apparent that it was to be tolerated rather than totally repressed, as under Stalin. While in a Western democracy, this liberal toleration of ideas would be seen as an essential part of the governing process, for the Soviet system it was damaging. The very heart of Soviet planning was based upon the unquestioning obedience and compliance of the people.15 As the means of coercion were lessened, and increasing scope for debate permitted, it is possible to suggest that the CPSU was gradually loosing control of its population. A basically totalitarian state cannot afford to have dissident opinions if it is to function. The liberalisation of controls could therefore be regarded as an underlying factor in the collapse of the Soviet system. Related to this loosening of controls came an increase in corruption, which spread from initial small scale bribes in the early years, to corruption that involved the highest levels of the CPSU. By the 1970's, 'feudal baronies' were being established in the Urals and Uzbekistan, and rumoured conspiracies involving Brezhnev's daughter in theft and bribery.16 The corruption became endemic to the Soviet Union, further reducing its economic efficiency and damaging the credibility of its leadership. It could be said that after the death of Stalin, corruption increasingly ate away at the effectiveness off the administrative-command system of control so central to the idea of the Soviet system. With its decay, it is possible to argue that it was only a matter of time before the system would collapse. American foreign policy could have been considered to contribute to the collapse of the Soviet system. The main evidence of this once again links back to the economic shortcomings of the Soviet system. After 1945, when relations between the USA and the USSR cooled to such an extent that the Cold War developed, both nations worked to ensure neither side developed a military advantage over the other. ...read more.

What is clear that problems were not resolved as they arose, but left to grow and develop until they became insurmountable by the 1990s. I personally believe that the key reason why the Soviet system collapsed was probably economic. Right from the outset there were doubts over the ability of a centrally planned socialist economy to function properly, even though this was brought into question in the 1950s and 60s. Even were it not for the possibility that there was no chance the economy could function, there is evidence to suggest it was mismanaged. The communist party had promised economic growth, an end to poverty and employment for all. What it produced was an unsustainable level of spending on defence, industry with low productivity levels and an economy rife with corruption and mismanagement. Market reforms were instituted too late to be effective; the system had already disintegrated to such a point where a market could not function effectively. Without a properly functioning economic system, it would, in reality, be nearly impossible for any political system to survive. It should be remembered though that it was not just economic problems that caused the Soviet system to collapse. For an administrative-command system to function, the people's unquestioning loyalty and obedience is required. Dissenting opinions cannot be tolerated. Up until the death of Stalin in 1953, this was indeed the case, and few argue that the Soviet system ever looked likely to collapse under his dictatorial style of leadership. After 1953, however, we do see a clear move towards greater freedom of speech, beginning under Khruschev and cumulating in Gorbachev's abandonment of censorship. When also taken in context with the move away from political terror, by 1991 the CPSU had surrendered its powers to control the Soviet people. Without the means of coercion, a dictatorial regime that looses the support of its people and control of its economy will not last, as the case of the Soviet Union demonstrates. ?? ?? ?? ?? Adam Peluch GV1250: Extended Essay p.1 / 3 ...read more.