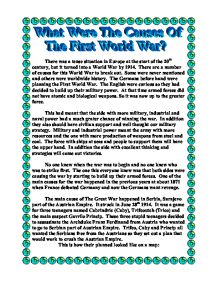 What Were The Causes Of The First World War?

There was a tense situation in Europe at the start of the 20th century, but it turned into a World War by 1914. There are a number of causes for this World War to break out. Some were never mentioned and others were worldwide history. The Germans before hand were planning the First World War. The English were curious so they had decided to build up their military power. At that time armed forces did not have atomic and biological weapons. So it was now up to the greater force. This had meant that the side with more military, industrial and naval power had a much grater chance of winning the war. In addition they also should have civilian support and well thought our military strategy. Military and industrial power meant the army with more resources and the one with more production of weapons from steel and coal. The force with ships at seas and people to support them will have the upper hand. ...read more.

So these boys took their rusty weapons and stood in their appointed places. The on mistake the Archduke did was to tell everyone that he was coming. It was time the limo had been slowly driving to the Town hall. Caby had the first shot he threw the grenade into the back of the car, but the chauffer spotted it and threw back into the crowd where twenty people were killed. Caby then quickly jumped into the river. Trifco was getting ready to shot his rifle, but there was a guard standing next him who caught Trifco. The chauffer quickly turned the limo into Franz Josef Street because the Archduke and his wife were shocked with terror. Princip was losing hope so he decided to go into Schillers Deli, which was there base. When the limo turned quickly the driver lost control so the car slid in a halt in front of Schillers Deli. ...read more.

* Rivalry between the countries. Here is a summarisation of all the points for the causes of the Great War: * The major European power had been competing against each other to build the largest empires. * Serbian nationalist assassinated the heir to the throne of the Austrian Empire. * Germany and Britain were competing to build the world's most powerful navy. * Serbians in the Austrian Empire wanted to be free and join their own state of Serbia. * The European rival alliance system encouraged both sides to behave aggressively. * The European powers wanted to build up their prosperity by weakening the trading power. * At the beginning of August 1914, Russia, France and Germany all mobilized their huge armies in an attempt to force the other side to back down. In conclusion to the Great War there were many conflicts between countries to cause the outbreak of World War One. This meant that not one country started it but all the European countries, which were building its own army and competing against each other. All the causes in this essay triggered, The First World War. ...read more.