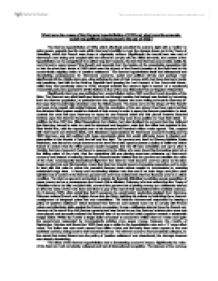 What were the causes of the German hyperinflation of 1923 and what were its economic, social and political consequences to the end of 1923?

What were the causes of the German hyperinflation of 1923 and what were its economic, social and political consequences to the end of 1923? The German hyperinflation of 1923, which effectively provided the extreme right with a medium to seize power, arguably had its roots within Germany's inability to meet the clauses drawn up in the Treaty of Versailles, which the French were keen to vigorously enforce. Significantly the turmoil was also one of Germany's own doing and coupled with her refusal to comply with the Allies demands, the causes of the hyperinflation can be categorised in to either long term reasons, the fact that Germany was unable realise its commitment to repay loaned 'War Bonds' and secondly from the burden of the unworkable reparations bill, or into the short term factor of 1923 which saw the impact of the French invasion of the Ruhr lead to the economically crippling action of 'passive resistance'. The German hyperinflation itself had widespread and devastating consequences for Germany's economic, social and political climate and perhaps most significantly hit the middle class who, after suffering the loss of their money which had been tied up in banks and pensions, lost faith in the Weimar Republic and ignoring the 'red menace' of the Communist threat, unlike they had previously done in 1919, swayed towards the extreme right in search of a reactionary monarchist party who operated in similar fashion to that of the now disbanded but not forgotten Kaiserreich. ...read more.

Within six months a single dollar amounted to around five million German marks and again the government responded by incompetently printing more paper money. Between the months of September, October and November 1923 there was a spike in the hyperinflation rate and a 'J' curve effect noted. The dollar was now worth around four billion marks and famously there were reports of the now worthless currency being used to fuel household stoves. The German economy had completely collapses, to the extent that under Stresemann the policy of 'passive resistance' was abandoned, the damage however was already devastating. The effect of the German hyperinflation had a devastating economic impact. Significantly the value of the German mark completely collapsed and lost all international recognition. The descent of the currency into worthlessness was worsened by the effect of the 'J' curve which ensured that that the rate of inflation was accelerating which therefore ensured that little could be done to halt its rapid increases, indicated by the fact that by November 1923 workers were demanding pay twice in the working day as to ensure that they could buy as much as possible before they suffered another rise in prices. Although the effect had occurred over several years by the end of 1923 it had spiralled out of control and had reached a point where financially Germany was almost beyond the point of return. Furthermore Germany also witnessed the flight of foreign investors from the mark and this itself had serious implications for Germany who was forced to pay exorbitant amounts for food imports, with the Allied blockade seriously affecting Germany's ability to deal with the rest of the world. ...read more.

Moreover the French occupation of the Ruhr inflamed nationalist feelings within the population, spurred on by rightist propaganda relating to the French use of black colonial troops, much of the German population was left outraged by the French actions and more importantly by the fact that the Weimar Republic would not forcefully defend itself. The Krupps incident and the murder of Schlageter, who was portrayed as a National hero, did little to ease tensions. Furthermore by August, the Stresemann lead government called of their policy of 'passive resistance' and importantly the extreme right used this opportunity to accuse the Weimar government of not acting against the French but instead allowing the French to remain in German territory. Levels of support for the extreme right had grown substantially and by September 1923 leading figures such as von Seekt, Ludendorff and Stinnes were contemplating a takeover of power. The series of events however ended in turmoil, due to the fiasco of the Beer Hall Putsch of 1923; where quarrelling amongst the right lead to the catastrophic defeat for Hitler's NSDAP and saw power remain in the hands of the Weimar Republic. In conclusion it can be observer that German hyperinflation itself has its origins within the First World War, notably the period of acute inflation was one of Germany's own doing through the policy of 'passive resistance'. Appreciably the fall out of the inflation was widespread, with the economy crippled and growing tensions between the classes resulting in a rise in support for both the extreme left and right. ...read more.