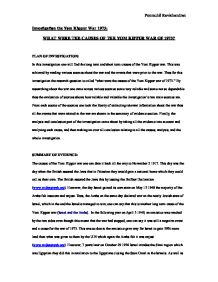 WHAT WERE THE CAUSES OF THE YOM KIPPUR WAR OF 1973?

Investigation the Yom Kippur War 1973: WHAT WERE THE CAUSES OF THE YOM KIPPUR WAR OF 1973? PLAN OF INVESTIGATION: In this investigation one will find the long term and short term causes of the Yom Kippur war. This was achieved by reading various sources about the war and the events that were prior to the war. Thus for this investigation the research question is called "what were the causes of the Yom Kippur war of 1973." By researching about the war one came across various sources some very reliable and some not so dependable thus the evaluation of sources shows how reliable and valuable the investigation's two main sources are. From each source of the sources one took the liberty of extracting relevant information about the war thus all the events that were related to the war are shown in the summary of evidence section. Finally, the analysis and conclusion part of the investigation came about by taking all the evidence into account and analyzing each cause, and then making an over all conclusion relating to all the causes, analysis, and the whole investigation. SUMMARY OF EVIDENCE: The causes of the Yom Kippur war one can date it back all the way to November 2 1917. This day was the day when the British assured the Jews that in Palestine they would gain a national home which they could call as their own. The British assured the Jews this by issuing the Balfour Declaration (www.mideastweb.org). ...read more.

Sachar I also felt that it had much importance and that it had contributed to my investigation. This was so because even though this source was biased, I felt that it had shown a whole different view point of the war than the other source which was not bias. This was so because the source mainly concentrates on the Jewish state and what was going on in the Israeli government during the war period. Also, it shows Jewish sentiments during the war thus this source opens up a different aspect of how to speculate this issue. Thus I feel it was valuable source to have. Also, the fact that the author writes about the past of Israel and the Jewish struggle I feel it further strengthens the reliability of this source. Nevertheless, this source was not perfect, due to this source being bias I felt that it did not give an accurate picture of the causes of the war. Also the fact that this source concentrates on the Jews and Israel thus it does not talk a lot about the Arabs and their side of the story. Thus I felt that this was a let down for my investigation. ANALYSIS: The events prior to the Yom Kippur war need to be all taken to account if one is to achieve a thorough understanding on why the war actually broke out. Thus, one dates the first cause of the war all the way back to the Belfour Declaration. ...read more.

However, Sadat warned Israel that if a peaceful agreement would not be reached, Sadat would wage war to achieve it. This was not taken seriously by the Israelis, thus on October 6 1973 the Arabs launched a surprise attack on Israel which started the Yom Kippur war. Israel's stubbornness one can say caused the short term cause of the Yom Kippur war it's arrogance triggered off the last solution for Sadat to achieve peace. However, one can say that Nasser's aggression created Israel's arrogance and now with the chance to give back the hostility to the Arabs since Israel was in the power seat, Israel would not give it up and with its confidence over the years they could neglect any Arab terms proposed. CONCLUSION: In conclusion, one can say that post WWII it was necessary for the Jews to have a state of their own which they could call home. This mainly due to prevent another holocaust from occurring again, thus the birth place of Judaism was given to the Jews as their own state, Israel was created. However, the Palestinians and the Arab nations surrounding Israel obviously were not pleased with this, thus Nasser's plans of putting aggression policies towards Israel were widely accepted in the region. Even though Nasser had failed over and over to achieve his aim of throwing out the Jewish state in an Arab "ocean" the Middle East. Thus after, Nasser had died his aggressive policies had given Israel a negative impression, thus when Sadat came to power his peaceful solutions were neglected, therefore Sadat's impatience got the best of him and thus he declared war on Israel and started off the Yom Kippur war. Ponmuhil Ravichandran ...read more.