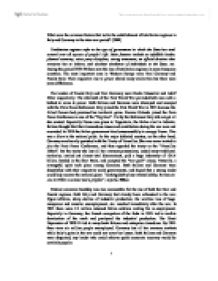 What were the common factors that led to the establishment of totalitarian regimes in Italy and Germany in the inter-war period? (1990)

What were the common factors that led to the establishment of totalitarian regimes in Italy and Germany in the inter-war period? (1990) Totalitarian regimes refer to the type of government in which the State has total control over all aspects of people's life. Main features include an infallible leader, planned economy, strict party discipline, strong armament, an official doctrine that everyone has to believe, and absolute obedience of individuals to the State, etc. During the period 1919-39 there saw the rise of totalitarian regimes in some European countries. The most important ones in Western Europe were Nazi Germany and Fascist Italy. Their respective rise to power shared many similarities but there were some differences. The leaders of Fascist Italy and Nazi Germany were Benito Mussolini and Adolf Hitler respectively. The aftermath of the First World War provided both men with a hotbed to come to power. Both Italians and Germans were dismayed and annoyed with the Paris Peace Settlement. Italy joined the First World War in 1915 because the Allied Powers had promised her territorial gains. Premier Orlando joined the Paris Peace Conference as one of the "Big Four". ...read more.

By 1933 there were six million people unemployed. Germany lost all her overseas markets while Italy's gains in the war could not cover her losses. Both Italians and Germans were despaired; any leader who could achieve quick economic recovery would be certainly popular. The First World War witnessed the victory of the western democratic powers. Yet democracy failed to save the infant republics. The Weimar Republic was the most democratic form of government that Germany had ever had. Kaiser William II abdicated and fled, marking the end of the Hohenzollern empire. However, the party government was terribly inefficient. There were too many parties but none won absolute majority in the Reichstag. As the system of proportional representation was adopted, coalition cabinets were inevitable. Politicians were irresponsible while policies were inconsistent. They were incapable of solving the postwar difficulties. Though Italian politicians might be more experienced, they were corrupt and the frequent changes of coalition governments created similar problems as those of Germany. Efficient one-party rule became a good alternative to both dismayed Italians and Germans. ...read more.

Both had organized highly disciplined parties to spread activities and combat opponents. Both had appealing ideologies and supported an expansionist foreign policy. To Italians and Germans, both were strong leaders in sharp contrast to the weak parliamentary governments. However, there were some differences in the rise of the totalitarian regimes between Italy and Germany. First, Germany inherited Prussian authoritarianism; her democratic tradition was shallower than Italy's. In particular Hitler who had served in the army and promised a massive rearmament programme could get the Reichswehr goodwill. Germans who did not believe democracy supported Hitler's "action without thought" (A.J.P. Taylor) and "return to barbarism". (A. Lyttanson) Second, Mussolini came to power quickly after the First World War, whereas Hitler could not do so. His Munich Putsch failed in 1923. He could not realize his dream until Stresemann's death in 1929 and the occurrence of the Great Depression in 1929-33. Third, Mussolini rose to power with a coup d'etat by his March on Rome, while Hitler's Nazi Party had won almost absolute majority in the Reichstag with popular support and came to power constitutionally. In a nutshell, the various circumstances during the inter-war period did pave the way for the establishment of totalitarian regimes in Italy and Germany. 1 1 ...read more.