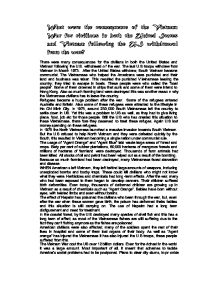 What were the consequence of the Vietnam War for civilians in both the United States and Vietnam following the U.S withdrawal from the war?

Sixty per cent of rubber plantations, 60,000 hectares of mangrove forests and millions of hectares of farmland were destroyed. Thousands of farm animals had been killed. All stocks of oil and petrol had been wiped out as a result of the bombing. Because so much farmland had been destroyed, many Vietnamese faced starvation and disease. WHEN American s left Vietnam, they left behind large amounts of weapons, including unexploded bombs and booby traps. These could kill civilians who might not know what they were. Herbicides and chemicals had long-term effects. After the war, many who had been exposed to them began to develop cancers. Their children suffered birth deformities. Even today, thousands of deformed children are growing up in Vietnam as a result of chemicals such as "Agent Orange". Babies have born without eyes, with twisted limbs and even without brains. ...read more.

Plans to clear city slums, to provide medical care for the poor and to reduce inequality could not be carried on, simply because the money was needed to pay for the cost of the war in Vietnam. Abandoning these plans caused considerable bitterness and anger in America. As well as financial price, the U.S paid a large amount in human suffering in Vietnam. Many soldiers who fought in Vietnam suffered not only physical injury but psychological damage as well. They experienced "post-traumatic stress soldiers", as a result of fightening in the jungle and seeing their fellow soldiers killed. As many as 700,000 veterans may have form this condition. To many it brought depression and attack of rage. Some found their marriages ending in divorce, others turned to drugs and alcohol. Suicide among ex-soldiers has also increased. Most important consequences, I feel was in the psyche of the Americans minds that they felt guilty for what their country had done. ...read more.