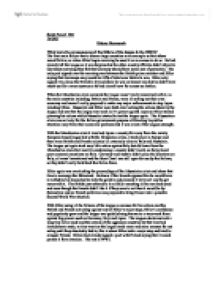 What were the consequences of the failure of the league in the 1930's?

Sarah Powell 10D 14/1/03 History Homework What were the consequences of the failure of the league in the 1930's? The first main failure was to disarm large countries as an example so that others would follow, so when Hitler began rearming he used it as an excuse to do so. He had already left the league so it was helpless but the other country officials didn't object to Germanys rearming they felt that Germany should have some sort of protection. The only pact signed over the rearming was between the British prime minister and Hitler saying that Germanys navy could be 33% of what ever Britain's was. Hitler only signed it to please the British to try and show he was an honest man but he didn't have much use for a navy anyway as he had aircraft now for across sea battles. ...read more.

The Abyssinian crisis was not only for the Italian governments purpose of directing its publics attention away from their economic problems but it was a test of the leagues strength. With the Manchurian crisis it involved Japan a country far away from the mainly European based league but with the Abyssinian crisis, it took place in Europe and there were British and French colonies all extremely close to Italy and Abyssinia. The league yet again took very little action against Italy but did learn from the Manchurian crisis that morally condemning a country didn't work, so they placed poor economic sanctions on Italy. Germany and Austria didn't place the sanctions on Italy, oil wasn't sanctioned and the Suez Canal was still open for use by the Italians, so they didn't really hold back the Italian force. ...read more.

With Hitler using all the failures of the league as excuses for his actions and the British and French not acting against any of Hitler's major steps, Hitler's confidence and popularity grew and the league was quickly being known as a very weak force against big powers such as Germany, Italy and Japan. The leagues decisions took a long time to be made and the actions of the aggressor countries by that time had already been made, as time went on the league made more and more excuses for not acting until they absolutely had to, this is when Hitler took a major step and tried to conquer Poland. Britain had already signed a pact with Poland saying that it would protect it from invasion. The rest is WW2. ...read more.