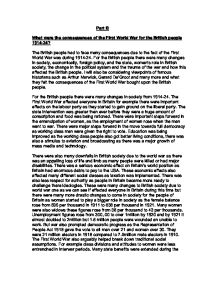 What were the consequences of the First World War for the British people 1914-24?

Over investment in the staple industries, iron, steel, ships, coal and textiles were no longer needed in peacetime. These industries lost their pre war primacy and entered a period of slow decline. Britain's wartime capital expenditure and her empire were greater then other participants. Britain had massive debts to pay off especially to the USA because debtor such as Russia failed to pay up and USA required full payment, by 1918 government expenditure was over 50% of GNP. In 1921 Britain's unemployment rose to 2million and Britain's share of world exports fell from 18% to 11%, so Britain wasn't doing as well as it use to overseas anymore, this led to Britain's overseas markets being lost to competitors. Along with the US dollar which replaced the British pound as the dominant international currency, unemployment was particularly bad in heavy industries such as mining, iron and steel it reached 67% in Jarrow. Norman Lowe looks at the economic effects on different social classes; he says how heavy taxation to help finance the war was mostly concentrated on the aristocracy and the middle classes. Lowe mentions how aristocrats were forced to sell there estates, but they were still wealthy but had lost there position as a dominant political and landowning class. Lowe also says how the middle classes living standards fell and that they were unable to maintain such large households and fewer domestic servants were needed, and if fell by 50% over the whole country. ...read more.

De'Groot quotes "The "Lost generation" did not consist of those who died, but those condemned going on living" the war had traumatised the whole country. There was also a major change in politics as there was a decline of the Liberals and the rise of the labour party. The labour party won support from the newly enfranchised voters following the reform act of 1918, which had increased the electorate from 28% to 74%. So far more people had a say in British politics. Most of the new voters were from the working class. According to Derrick Murphy the labour were able to win over many liberal supporters due to the fact that the labour party had a major stand on foreign policy, which was able to end secret diplomacy and as a result the labour share of votes rose from 7.1% in December 1910 to 22.2% in 1918. So in conclusion there were many consequences which the British people had to face because of world war one. The British society had its ups and downs during this time period, the economy suffered major blows in the time period of 1914-24 due to the wartime expenditure. Women had gained significant changes in society, like being able to vote and the state had changed its role due to the British people, and by improving living and working conditions for them. But the trauma of the First World War would always stay as many loved ones sacrificed they lives for Britain at the time. ?? ?? ?? ?? ...read more.