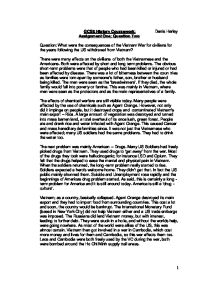 What were the consequences of the Vietnam War for civilians for the years following the US withdrawal from Vietnam?

GCSE History Coursework: Denis Harley Assignment One; Question Two Question: What were the consequences of the Vietnam War for civilians for the years following the US withdrawal from Vietnam? There were many effects on the civilians of both the Vietnamese and the Americans. Both were affected by short and long term problems. The obvious short-term problems were that of people who had been killed or injured or had been affected by disease. There was a lot of bitterness between the countries as families were torn apart by someone's father, son, brother or husband being killed. The men were seen as the 'breadwinners'. If they died, the whole family would fall into poverty or famine. This was mainly in Vietnam, where men were seen as the protectors and as the main representatives of a family. The effects of chemical warfare are still visible today. Many people were affected by the use of chemicals such as Agent Orange. However, not only did it impinge on people, but it destroyed crops and contaminated Vietnam's main export - Rice. ...read more.

America is still a 'drug-culture'. Vietnam; as a country, basically collapsed. Agent Orange destroyed its main export and they had to import food from surrounding countries. This cost a lot and soon, the country would be bankrupt. The International Monetary Fund (based in New York City) did not help Vietnam either and a US trade embargo was imposed. The Russians did lend Vietnam money, but with interest, leading to further debt. They were stuck in a hole, and without the worlds help, were going nowhere. As most of the world were allies of the US, this was almost certain. Vietnam then got involved in a war in Cambodia, which cost more money and lives for them and Cambodia, so this war effects them too. Laos and Cambodia were both freely used by the VC during the war, both were bombed around the Ho Chi Minh supply trail areas. Another aspect of the Vietnam War aftermath was that the country was totally Communist, leading to the beginnings of the dreaded domino theory, which led to the spread into Cambodia. ...read more.

They did not get involved in other conflicts until the Gulf War and the entire country became pacifistic. Another long-term problem was because of rape and inter-Vietnamese relationships. A lot of children were born mixed race and many turned to prostitution. This is still a problem in Vietnam today, but not only Vietnam; a large part of that Asian area has a large prostitution problem. Since the War, Hollywood has tried to 'glamorise' it in films. Films like Full Metal Jacket, Good Morning Vietnam! and Deer Hunter has tried to make the war seem more bearable to Americans. They try to make themselves feel much better and in a way, the films were a sort of propaganda to the new generation of people to show that it was not that awful. Many terrible things came out of the war. Drugs in the US, Prostitution in South East Asia. The murder of innocent people and the mass destruction of a beautiful country. Many people's lives were ruined by the war by the effects of chemical warfare and it left a generation of people emotionally scarred because of its devastation. 1 ...read more.