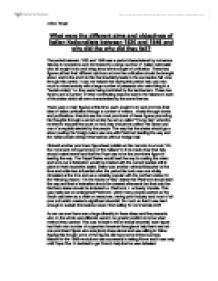 What were the different aims and objectives of Italian Nationalists between 1830 and 1848 and why did the why did they fail?

What were the different aims and objectives of Italian Nationalists between 1830 and 1848 and why did the why did they fail? The period between 1830 and 1848 was a period characterised by numerous failures in revolutions and dominated by a large number of Italian nationalist who all sought to try and bring about some sought of unification. These key figures all had their different opinions on how the unification should be brought about, and in the end it is this that inevitably leads to the successive failures through this period. It was not helped that during this period Italy was very much a mixed society with a large number of peasants who were living in a "feudal society" i.e. they were being controlled by the landowners. These two factors and a number of other contributing reasons lead to the failures in each of the states which all were characterised by the same themes. There were 4 main figures at this time, each sought to try and promote their idea of Italian unification through a number of means, mostly through books and publications. Mazzini was the most prominent of these figures promoting his thoughts through a secret society he set up called "Young Italy" whereby he tried to educate the youth on how Italy should be unified. His vision was one of a republic elected by the people. The way that the states should go a about ousting the foreign rulers was one with Piedmont leading the way and the Italian people doing it themselves without foreign help. ...read more.

This meant co-ordination of events was even worse. The people of Italy had no figurehead that they could see just someone who occasionally published their ideas. There were no common aims between the states and the people. The cause, which people were trying to fight for, was not well known. In 1848 the revolutions had been so spontaneous that some historians point out that many people did not know about them. 1848 was the "Year of revolutions" right across the globe spanning from France and Germany to Mexico there were revolutions. Wealthy Italians for fear of missing the opportunity just jumped on the bandwagon without actually thinking or planning about it. The feeling of diversity was well summed up Cowie and Wolfson. "People from North and South from town and countryside, might be foreigners to each other when they meet. There was, no strong communal feeling throughout the peninsula." [Cowie and Wolfson Years of Nationalism] Charles Albert while not a leading promoter of the unification was the king of Piedmont and with this came the responsibility that many people were expecting Piedmont to take a key role in the unification by leading the way. The reason for this is clear in that Piedmont was by far the richest and most advanced in terms of infrastructure than any of the other states. Albert started to introduce Liberal reforms and in doing so gave the people of Italy hope in the unification and set the way forward for the other states. ...read more.

However saying this there was some limited co-operation, in 1848 Naples, he Papal States and Lombardy Venetia came to the help of the Piedmontese in fighting Austria in 2 major battles. This was not enough and the later revolutions would prove that if there was cooperation there would have been more success. The infrastructure of Italy was in very primitive stages compared to the rest of the world at the time and leaders at the time failed to realise that for unification to happen a good infrastructure was needed to help this process along. Aspects such as transport and communications were needed so that revolutions could be coordinated. Later leaders such as Cavour were prepared to put their dignity and pride down by highlighting the need for reforms and this is a contributing factor to why the revolutions later on were successful. In the end it came down to Italy been to diverse a country in all aspects. The numerous leaders such as Mazzini and Gioberti were too ignorant in the self-beliefs that they were prepared to sit down and work out the way in which Italy could be best unified. It is interesting to note that note one of the thinkers during that time envisioned what method would be eventually successful in that the whole of Italy would be unified under a Piedmontese monarchy. The states were to diverse from each other and there was not a common goal for unification to happen yet. The states were to primitive to support a complicated unification process against foreign powers, which were far superior. Joshua Heugh ...read more.