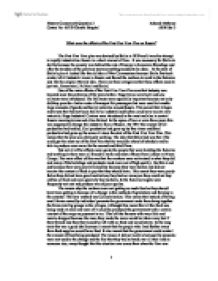 What were the effects of the First Five Year Plan on Russia?

What were the effects of the First Five Year Plan on Russia? The First Five Year plan was devised by Stalin in 1929 and it was his attempt to rapidly industrialise Russia in a short amount of time. It was necessary for Stalin to do this because the country was behind the rest of Europe in Economic Standings and after the troubles of the previous years something needed to be done. At the start of Stalin's plan it looked like the old idea of War Communism because Stalin first took control of all Industrial areas in Russia and forced the workers to work in the factories just like the original Marxist idea. There are three categories that these effects need to put into, Economical, Political and Social. One of the main effects of the First Five Year Plan was that Industry was boosted since the problems of the years before. Huge Dams were built and new railways were introduced. The Railways were especially important because not only did they provide a better route of transport for passengers but were used to transfer large amounts of goods and heavy materials around Russia. ...read more.

In the short term there were no problems in Social life but only for a select few. This was brought about by propaganda. The Communist Party produced massive amounts of propaganda telling the workers that all was well and creating an inspiration for the people of Russia and a new Soviet Union. An example of this is when a man named Stakhanov was supposed to have dug 102 tons of coal in one shift, fourteen times that of what a worker was expected to dig. Stakhanov became a Public Hero and was rewarded. But most of this was a cover up for what was really happening. There was no place for workers that couldn't work so most of these people were killed. The workers needed to be fed, healthy and educated but as not much food was coming from the country and they had to work so hard most of them were none of these. But there were benefits, since the introduction of the new Industrial areas unemployment almost ceased to exist in Russia and support for Stalin rose. Another positive effect was that in the past the different provinces of Russia had been in conflict especially during the Tsar's reign. ...read more.

These two things link up as not only was the country providing for the towns but the towns were also producing for the country by making farm machinery. It was this two way system that meant that if one of the two weren't working hard enough the other would lose out. It was the idea of this that kept them working. At the beginning of the First Five Year plan it looked as though it wouldn't work because nobody especially the workers and the peasants were used to the change but eventually things evened out as Stalin was able to work on one problem then another in the second and third Plans. By the end of the first plan Russia had overtaken the rest of Europe. This is proof that the Plan succeeded as well as the fact that later in the 1940's Russia became a very influential power in Europe and World War Two. The major effects were the Social effects because it was these that in the long term mattered to Russia. But Stalin was able to improve this in the second and third plans by building on what he already had. History Coursework Question 2 Edward Mathews Centre No: 65129 Christ's Hospital ARW Set 3 1 ...read more.