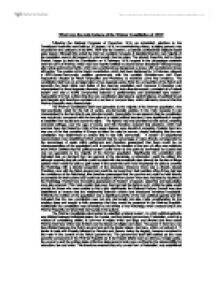 What were the main features of the Weimar Constitution of 1919?

What were the main features of the Weimar Constitution of 1919? Following the National Congress of December 1918, as scheduled, elections to the Constituent Assembly were held on 19 January 1919. An overwhelming victory, at eighty percent, was recorded for the collective of the SPD, DDP and the Zentrum, a Catholic confessional religious based party based. Although this ended the German socialist monopoly, it signalled that the vast majority of the population were in full support of a democratic German state. The elected Assembly, led by Hugo Preuss, began to draft the Constitution on 6 February 1919, located in the picturesque southern German town of Weimar, which was now heavily fortified by around seven thousand Freikorps troops after being preferred to Berlin, which was considered too dangerous a venue, with revolutionary forces still active. The creation of the interim constitution, which had been fashioned by 10 February, allowed a SPD-Centre-Democratic coalition government, with the socialist Scheidemann and Ebert respectively elected as Reich Chancellor and President, to therefore come into existence. The constitution itself was an amalgamation of two separate parts, firstly the composition of the Reich and secondly the basic rights and duties of the German population and moreover it therefore was characterised by three separate elements, the fact that it was ultra-democratic, consisted of a Federal system and was a hybrid compromise between a parliamentary and presidential style system. ...read more.

Furthermore innovative guarantees of freedom of speech, assembly and association were also ensured. This made certain that every German had the right to work, whilst the state would provide for those who were unable to find a job, significantly the National Factory Council was also established to ensure that the relationship between unions and employers remained hospitable. Evidently the welfare of the population was a significant priority of the new political agenda and this indicated that the new constitution was not only democratic but also made consideration for the working class and sought to fully guarantee that they would be protected in the Weimar Republic. Additionally the constitution was amended by two-thirds of the Reichstag which ensured that it the Weimar Republic remained fully democratic in its actions. The Weimar Constitution also looked to establish a federal system, in which political authority was divided between individual states, the Lander, and the federal government. Federalism, which is a method of centralising affairs, is common in states which are large and diverse and thus suited Weimar Germany which was divided over the issues of religion and class. The power in Germany was thus divided between the Reich government and the lander states. Germany, which comprised of 17 lander in total with Prussia followed by Bavaria and Saxony being the largest, however remained in the main in the control of the Reich government. ...read more.

Moreover under article 48 of the new constitution it was also apparent that the Reich President could rule by decree, by temporarily suspending constitutional guarantees and intervening if it was deemed necessary to restore public safety and order. The drafters of the Weimar constitution had intended that the President's position would be as check to the Reichstag and that article 48 would be no more that a failsafe in a case of a national emergency. Between 1930 and 1933 Germany, however, was governed continuously on the basis of these emergency powers and the government was disrupted on several occasions as the Reich President saw it fit to take control over Germany. Whilst the position of the Reich President did provide Germany with a failsafe it left the government ill-equipped to deal with any serious emergencies. Moreover it left Germany with a serious dilemma, who should rule of the government, the Resident or the Reichstag? Therefore in conclusion it is apparent that the Weimar constitution was characterised by three main elements, the fact that it was ultra-democratic, consisted of a Federal system and was a hybrid compromise between a parliamentary and presidential style system. This therefore, although ensuring that the population was provided for, left Germany in a state of unbalance as it became clear that there was not just one single body who would attempt to rule Germany over the coming years. ...read more.