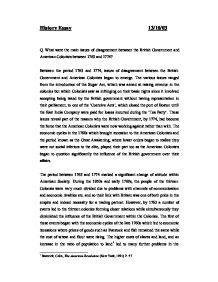 What were the main issues of disagreement between the British Government and American Colonists between 1763 and 1774?

History Essay 13/10/03 Q. What were the main issues of disagreement between the British Government and American Colonists between 1763 and 1774? Between the period 1763 and 1774, issues of disagreement between the British Government and American Colonists began to emerge. The various issues ranged from the introduction of the Sugar Act, which was aimed at raising revenue in the colonies but which Colonists saw as infringing on their basic rights since it involved accepting being taxed by the British government without having representation in their parliament, to one of the 'Coercive Acts', which closed the port of Boston until the East India Company were paid for losses incurred during the 'Tea Party'. These issues reveal part of the reasons why the British Government, by 1774, had become the force that the American Colonists were now working against rather than with. The economic cycles in the 1760s which brought recession to the American Colonists and the period known as the Great Awakening, where lower orders began to realise they were not social inferiors to the elite, played their part too as the American Colonists began to question significantly the influence of the British government over their affairs. The period between 1763 and 1774 marked a significant change of attitude within American Society. During the 1950s and early 1760s, the people of the thirteen Colonies were very much divided due to problems with channels of communication and economic rivalries etc. ...read more.

any form of British taxation being levied on them, as it would challenge the principles of government which they held and indeed their sole right to control expenditure and taxation. By 1767, the American Colonists were becoming increasingly angered over British claims that they could impose any law that they wanted. In 1767 the Townsend Acts were passed, they suspended the New York legislature until it agreed to implement the Quartering Act but perhaps more significantly for the Colonists they imposed duties on such goods as tea, glass, paper and lead. Although Colonial reaction was slow to come about, the Circular letter which stated that the rights of American Colonists were being infringed as they were expected to pay taxation without having any representation in British parliament3, began to stir up colonial resentment and culminated in occasional spurts of violence when all but the tax on tea were repealed as a symbolic gesture. By 1769, certain Colonists, but particularly those from South Carolina, were alarmed at what they perceived to be a British plan to take away their liberty and establish a somewhat authoritarian way of ruling them.4 These incidents, along with the controversy over whether or not a Bishop would be appointed for the Colonies, heightened the Colonists feelings of anger towards the British Government and the direction that their policy towards America was taking. The occurrence of the Boston Tea Party on 16 December 1773 was perhaps the most significant event in the period of disagreements between the British Government and American Colonists from 1763 to 1774. ...read more.