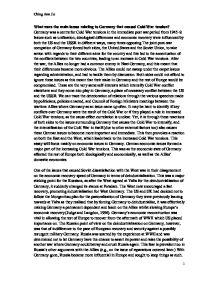 What were the main issues relating to Germany that caused Cold War tension?

What were the main issues relating to Germany that caused Cold War tension? Germany was a centre for Cold War tensions in the immediate post war period from 1945-9. Issues such as unification, ideological differences and economic recovery were influenced by both the US and the USSR in different ways, many times opposing The joint post-war occupation of Germany forced both sides, the United States and the Soviet Union, to take action with regards to their different aims for the country and this led to the accentuation of the conflicts between the two countries, leading to an increase in Cold War tensions. After the war, the Allies no longer had a common enemy in Nazi Germany, and this meant that their differences became more obvious. The Allies could not sweep under the carpet issues regarding administration, and had to tackle them by discussion. Both sides could not afford to ignore these issues as this meant that their stake in Germany and the rest of Europe would be compromised. These are the very same self-interests which intensify Cold War conflict elsewhere and they come into play in Germany, a place of necessary conflict between the US and the USSR. We can trace the deterioration of relations through the various speeches made by politicians, policies enacted, and Council of Foreign Ministers meetings between the wartime Allies where Germany as an issue came up often. It may be hard to identify if key conflicts over Germany were the result of the Cold War or if they played a role in increased Cold War tensions, as the cause-effect correlation is unclear. Yet, it is through these reactions of both sides to the issues surrounding Germany that causes the Cold War to intensify, and the intensification of the Cold War in itself (due to other external factors too) ...read more.

Furthermore, this economic problem evolved into a political ideology issue which further exposed the opposition between American and Russian ideological interests in Germany, and how the West tried to solve this economic problem caused the Soviets to distrust the West more, deepening Cold War tensions. The British were "desperate for a solution to this impasse" to the problem of paying large sums for food imports. (Grunbacher, 2004) To counter this draining of resources on the Western powers, the US proposed to get rid of the zonal borders which functioned directly as trade barriers. Thus, in December 1946, the Bevin-Byrnes agreement was signed, and the Anglo-American Bizone came into being. This was done primarily due to economic issues described in the previous paragraph and was a way for the US and the UK to decrease some of their economic burden on Germany. This move would increase trade and economically rejuvenate the Combined Economic Area. The Americans, however, also had less altruistic motivations for this move: this increase in economic welfare for the Germans would decrease any possibility of them turning to Communist ideologies. The Americans were particularly fearful after the speech made by Molotov in Paris, in which Molotov attacked what he saw as British imperialism, downplaying Soviet interests in Europe by saying that Russian troops were provided by treaties. If Germans continued to be impoverished in the West, they might turn to the Communist ideology from the Russians, and the Americans sought to avoid this. Also, Bizonia had the effect of limiting Soviet influence in event of unification. In the even that Germany was unified and dominated by Russia, Bizonia would divide the country economically and socially, making it less possible for Russia to wield influence over the Bizone. ...read more.

This showed how Cold War tensions, contributed to by the Russian insistence on reparations and deindustrialisation, and the Soviet refusal of the Marshall Plan, had intensified to a state where the West could no longer be under the pretence of quadripartite control any longer. Yet, there had been signs already, since 1945, that the West had been prepared to split Germany up into two. The agreement that the Soviets could only take reparations from its zone could be thus interpreted as a step towards that direction. The creation of Bizonia in 1946 was a preparation for this, in the sense that the borders of Bizonia could be a natural border for the separation of Germany. The West however, then in 1946, did not want to outrightly declare independence for West Germany, leaving a possibility for both sides of Germany to be reconciled. 3 years later, the merger of France's zone into Bizonia, into the Federal Republic of Germany, was an extension of this attempt to limit the influence that Russia would have over Germany. This move was prompted by the increasing tensions of the Cold War elsewhere and from the build-up of tensions caused by previous conflicts, and provided a confirmation of these tensions while causing existing tensions to increase as well, by showing very clearly to the Soviets that it had an interest in continuing to influence West Germany, and that then, clearly, the West is aligned against the East in the non-military grab for Europe, against Communist ideology at all costs. Comments: First 2 and half pages very good. After that the essay loses its focus + clarity somewhat. And why does it end here? The whole issue on Berlin is missed out. ...read more.