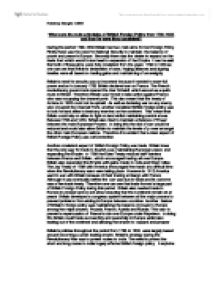 What were the main principles of British Foreign Policy from 1793-1853 and how far were they consistent?

What were the main principles of British Foreign Policy from 1793-1853 and how far were they consistent? During the period 1793-1853 Britain had two main aims for her Foreign Policy. Firstly there was the need for National Security to maintain the balance of power and peace in Europe. Secondly there was the desire to expand on the trade front which would in turn lead to expansion of the Empire. It can be said that both of these aims were fully consistent from the years 1793 to 1853 as one can see that Britain's declaration of wars, forging alliances and signing treaties were all based on trading gains and maintaining of sovereignty. Britain's need for security was so important because it needed to exert full power and so in January 1793 Britain declared war on France. The French revolutionary government opened the river Scheldt which served as a quick route to Britain. Therefore Britain was forced to take action against France who was occupying the channel ports. ...read more.

Another feature of Britain's foreign policy was maintaining the balance of power in Europe among the major powers; Prussia, France, Austria and Russia. This was to prevent a repercussion of France's rule over Europe under Napoleon. In doing this Britain could trade successfully and peacefully in Europe whilst also trading out of the continent and allowing the empire to expand and prosper. Britain's policies throughout the period from 1793 to 1853 were largely based around becoming a world trading empire. Britain's strategy during the Revolutionary War was to protect routes to India. The need to protect the short and long routes to India hugely affected British foreign policy. It explains why Britain clashed with Napoleon on the Battle of the Nile, in order to protect Births trading Routes through Egypt and Britain's desire to keep Russia from obtaining Constantinople hence leading to their protection of the Ottoman Turks. The short Route to India was most important because it was also a link to the Mediterranean. ...read more.

The desire for national security meant that Britain would not let any potential enemy acquire the Channel Ports demonstrated by her declaration of war with France in 1793 and putting the Low Countries under friendly Dutch rule. The other consistent policy to preserve national security was retention of her naval supremacy gained after the Battle of Trafalgar (1805). However British Foreign Policy was not solely guided towards national security but also guided by the desire to expand her trade. Any other British involved foreign incident that did not involve Britain's homeland security involved her trading interests. This desire for expansion of British trade lead to her endeavour in establishing and maintaining peace in Europe (which also affected national security) and to the expansion of her Empire. Thus it can be said that every British foreign policy was in some way derived from her desire for national security of expansion of her trade. These policies stayed consistent from 1793 to 1853 as throughout this period the incidents that involved Britain on an international level always went back to theses policies. ?? ?? ?? ?? Robdeep Sangha U6SB ...read more.