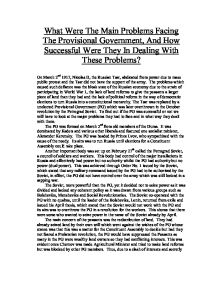 What Were The MainProblems Facing The Provisional Government, And How Successful Were They InDealing With These Problems?

What Were The Main Problems Facing The Provisional Government, And How Successful Were They In Dealing With These Problems? On March 2nd 1917, Nicolas II, the Russian Tsar, abdicated from power due to mass public protest and the Tsar did not have the support of the army. The problems which caused such defiance was the bleak state of the Russian economy due to the strain of participating in World War 1, the lack of land reforms to give the peasants a larger piece of land than they had and the lack of political reform in the way of democratic elections to turn Russia into a constitutional monarchy. The Tsar was replaced by a unelected Provisional Government (PG) which was later overthrown in the October revolution by the Petrograd Soviet. To find out if the PG was successful or not we will have to look at the major problems they had to face and in what way they dealt with them. The PG was formed on March 2nd from old members of the Duma. ...read more.

This shows that there were some who wanted to seize power in the name of the Soviet already by April. The main concern of the peasants was the redistribution of land. They had already seized land by their own will which went against the wishes of the PG whose stance was that this was a matter for the Constituent Assembly to decide but had they not feared a Prolatarian revolution, the PG would have suppressed the Peasants as many in the PG were wealthy land owners so they had conflicting interests. This was evident once Chernov was made Agricultural Minister and tried to make land reforms but was blocked by other PG members. Thus, due to a clash of interests and secretly unwilling to let go of land, the PG failed to resolve the land problem which caused them to have no support amongst the Peasantry. The majority of Russians wanted a Constituent Assembly in which they could have the chance to express their opinions, like any other democratic state. The PGs stance on the Constituent Assembly was that it could only happen after the war and as they felt there was more to ...read more.

The foreign minister at the time, Milyukov (leader of the Kadets) sent a note infamously known as the 'Milyukov note' which re-assured the allies that Russia would continue to fight an offensive war. Once this note was leaked it greatly damaged the integrity of the PG. The consequence of the note was that Milyukov and Guchkov were forced to resign, Chernov (Social Revolutionary) and Tseretelli (Menshevik) became ministers whilst Kerensky was promoted to War Minister. Each party was represented apart from the Bolsheviks, who decided they did not want to be in the same lot as those which brought about the 'Bourgeoisie revolution', Lenin felt there should be another revolution, a workers revolution. This was significant in that now any failings of the PG would be cast upon the Menshevik and Social Revolutionary parties and the Bolsheviks could use this in a propaganda war to win the hearts of workers, soldiers and peasants. Kerensky initiated the June offensive, in a last ditch effort to turn the war in Russia's favour. This failed miserably which resulted in the July Days, when soldiers and workers rioted on the streets of Petrograd. They were put down by forces loyal to the PG and ...read more.