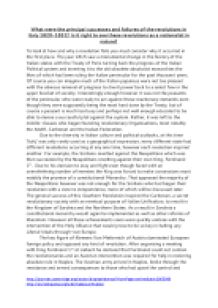 What were the principal successes and failures of the revolutions in Italy 1820-31?

﻿What were the principal successes and failures of the revolutions in Italy 1820-1831? Is it right to see these revolutions as a nationalist in nature? To look at how and why a revolution fails you must consider why it occurred in the first place. The year 1815 saw a monumental change in the history of the Italian states with the Treaty of Paris turning back the progress of the Italian Political system and inverting it to the old obsolete absolutist monarchies the likes of which had been ruling the Italian peninsular for the past thousand years. Of course you can imagine much of the Italian populous were not too pleased with the obvious removal of progress to divert power back to a select few in the upper bracket of society. Interestingly enough however it was not the peasants of the peninsular who were ready to act against these reactionary demands even though they were supposedly being the most hard done by the Treaty, but of course a peasant is much too busy and perhaps not well enough educated to be able to devise a successful plot against the system. Rather, it was left to the middle-classes who began founding revolutionary Organisations, most notably the Adelfi, Carbonari and the Italian Federation. ...read more.

One such reason was the lack of a clear aim. In the revolution of 1820 in Naples, the Carbonari took control. The Carbonari had their hearts set on implementing two main policies; opposition to feudalism and support for constitutional and administrative governments. In comparison to other secret societies the Carbonari were relatively moderate and did not look towards extremist policies as a way of progress, rather they believed a policy in which affected as many people for the greater good is one of which a Nation should strive for. A rather interesting aspect of the Carbonari is that they occasionally looked to a higher power to support their revolts which would present a certain degree of a centralised society but also tells historians the knowledge that even the Carbonari believed they did not possess the necessary strength to unite Italy. Another double-edged sword of the society if you will is that they were not such a closed group as other societies. This allowed a greater number of members which were desperately needed however also meant that everyone and anyone who believed that a constitutional Government was one of which that was desirable over the current system. Rather unsurprisingly this included a significant number of middle class Italians resulting in a lot of members being unable to decide on a general ideal to implement once the revolution had succeeded. ...read more.

There was little to note in the way of success however, whilst some states gained minor liberal additions to their Governmental laws the years to come would mean that these very laws would be abolished by the same leaders that promised to keep them in the hope of subsidising unrest which ultimately contributed by public demand further escalating to the point of further revolutions in 1848. The failure of the revolutions in Sardinia, Naples, Piedmont and the Central states is not to be overstated. Little went in the way of consequences due to there being little the Governments in question could actually do to make take away further rights from their citizens. So in essence nothing was really lost by the Italian people who took part in these revolutions endearing for change. On the contrary, many believe much was gained. It was now clear that a revolution could only succeed with a weakened Holy Alliance. It was also obvious that a true leader needed to come forth and unite the Italian middle classes with drastically different political views on what to do with the Italian states once such a revolution had succeeded. In conclusion, these revolutions that took place in the years 1820-31 can be considered by Historians the early beginnings of the path forged by the Italian people to unite the peninsular under one flag. http://journals.cambridge.org/action/displayAbstract?fromPage=online&aid=2865988 http://en/wikipedia.org/wiki/Italianunification ...read more.