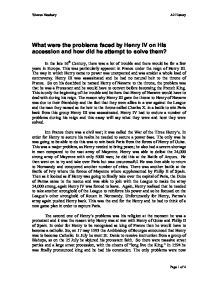 What were the problems faced by Henry IV on His accession and how did he attempt to solve them?

What were the problems faced by Henry IV on His accession and how did he attempt to solve them? In the late 16th Century, there was a lot of trouble and there would be for a few years in Europe. This was particularly apparent in France under the reign of Henry III. The way in which Henry came to power was unexpected and was amidst a whole load of controversy. Henry III was assassinated and he had no natural heir to the throne of France. So on his deathbed he named Henry of Navarre to the throne, the problem was that he was a Protestant and he would have to convert before becoming the French King. This is only the beginning of the trouble and bothers that Henry of Navarre would have to deal with during his reign. The reason why Henry III gave the throne to Henry of Navarre was due to their friendship and the fact that they were allies in a war against the League and the man they named as the heir to the throne called Charles X. in a battle to win Paris back from this group Henry III was assassinated. Henry IV had to endure a number of problems during his reign and this essay will say what they were and how they were solved. Inn France there was a civil war; it was called the War of the Three Henry's. In order for Henry to secure his realm he needed to secure a power base. ...read more.

Henry IV came to power with a lot of religious problems along with the fact that religious war was looming, however through his pragmatism and peaceful ideals he was able to deal with these problems. Before Henry had come to the throne, the war in which the previous monarch had been involved in was disastrous for the country's economy and so it was up to Henry to find out how to sort them out. Henry was in debts of 138 livres; the crown owed money to the English crown, German princes, Swiss Cantons and the Grand Duke of Tuscany. He did this by employing the protestant, the Duke of Sully. Henry began to develop0 the ideals of absolutism and started to rebuild the nation's capital. He also started to rebuild the state industry for business. In 1602 he started the Council of Commerce, which fostered the silk industry. He also set up factories for tapestry production such as the Gobbelins Factory. The country also began to make progresses in the production of morocco leather, paper, fine glass and metallurgical industries. This new stability of Henry's reign brought about a new revival in agriculture, harvests got better, cash crops increased and generally every one was enjoying the reign of Henry. The duke of sully also started to invest in developing bridges, canals and improving roads. He made sure all the work was done to a high standard by inspecting it through a team of inspectors and treasurers, so he used centre control. ...read more.

With Spain being the most dominant and strongest force in Europe it was very threatening with Spain being on the doorstep. The Spanish were constantly involved in French business due to the war going on before Henry IV came to power and the way in which they had to leave Paris. Philip II was also involved in the plots against France and didn't like the way in which the Protestants were being treated as he felt that they were being treated to good. He wasn't also very pleased in the way in which Henry converted to Catholicism and promised to get rid of the Protestants, but instead used the Edict of Nantes to maintain peace. Spain also used their wealth to influence Provincial Governors and to cause revolts with the peasantry to make it hard for France. In conclusion henry had a lot of problems on his accession to the throne, and he dealt with them very well. He had been threatened of civil war and he obviously didn't want this as it would put the country into debt and would be the worst thing that could possibly happen to the country. Other problems he had were religion and the way in which he dealt with religion. He dealt with it well, to keep the peace. He also improved the country's finance, tried to keep provincialism under order due to the size of the country. He also did well to keep Spain off his back. So finally Henry IV had a lot of problems as most monarchs of his time but managed to deal with them sufficiently. ?? ?? ?? ?? Warren Newbery A2 History Page 1 of 3 ...read more.