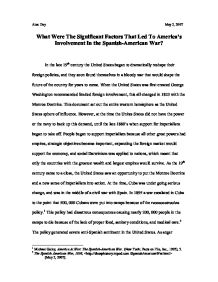 What Were The Significant Factors That Led To America's Involvement In the Spanish-American War?

Alex Day May 2, 2007 What Were The Significant Factors That Led To America's Involvement In the Spanish-American War? In the late 19th century the United States began to dramatically reshape their foreign policies, and they soon found themselves in a bloody war that would shape the future of the country for years to come. When the United States was first created George Washington recommended limited foreign involvement, this all changed in 1823 with the Monroe Doctrine. This document set out the entire western hemisphere as the United States sphere of influence. However, at the time the Unites States did not have the power or the navy to back up this demand, until the late 1880's when support for imperialism began to take off. People began to support imperialism because all other great powers had empires, strategic objectives became important, expanding the foreign market would support the economy, and social Darwinism was applied to nations, which meant that only the countries with the greatest wealth and largest empires would survive. As the 19th century came to a close, the United States saw an opportunity to put the Monroe Doctrine and a new sense of imperialism into action. At the time, Cuba was under going serious change, and was in the middle of a civil war with Spain. In 1895 a war escalated in Cuba to the point that 500, 000 Cubans were put into camps because of the ...read more.

Godkin who was the editor of the weekly Nation. Godkin frequently spoke out against Hearst and Pulitzer accusing them of gross misrepresentation, deliberate invention and unnecessary recklessness. He said "They were firebrands, tossed into the American crowd in an attempt to ignite a war."13 No matter how much Godkin spoke out against Hearst and Pulitzer, they continued to dominate the American public with their embellished stories and pro war slants. The American public's humanitarian concerns came into play after reading these articles. They soon believed how terrible the Cuban conditions were and began to plead the government to take aggressive steps towards Cuban independence. When the U.S. naval ship, the Maine, exploded in Havana Harbor, the American people, and their government were confused about what had happened and who had done it. Many fingers began to point at Spain, but even if Spain had not committed the crime, the suspicion alone by the American people was enough to push the war envelope a bit further. One of the final peaceful solutions to the problems in Cuba, presented by McKinley, was autonomy. This granted the country the right of self-government, however, a large portion of the Cuban population opposed autonomy and soon riots broke out. The battleship Maine simply arrived in Havana for a "friendly visit" on January 25, 1898 in response to pro-Spanish mobs.14 Suddenly, on the evening of February 15, 1898, at 9:45 PM, the Maine blew up, ...read more.