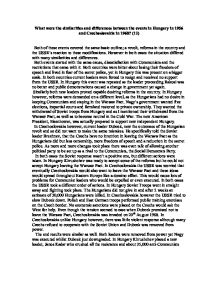 What were the similarities and differences between the events in Hungary in 1956 and Czechoslovakia in 1968? (12) Both of these events covered the same basic outline; a revolt, reforms in the country and the USSR's reaction to these modifications. However in both cases the situation differed with many similarities and differences. Both events started with the same cause, dissatisfaction with Communism and the restrictions that came with it. Both countries were bitter about losing their freedom of speech and lived in fear of the secret police, yet in Hungary this was present on a bigger scale. In both countries current leaders were forced to resign and received no support from the USSR. In Hungary this event was repeated as the leader proceeding Rakosi was no better and public demonstrations caused a change in government yet again. ...read more.

As more and more changes took place there was even talk of allowing another political party to be set up as a rival to the Communists, the Social Democrats Party. In both cases the Soviet response wasn't a positive one, but different actions were taken. In Hungary Khrushchev was ready to accept some of the reforms but he could not accept Hungary leaving the Warsaw Pact. In Czechoslovakia the USSR was worried that eventually Czechoslovakia would also want to leave the Warsaw Pact and these ideas would spread throughout Eastern Europe like a domino effect. This would cause lots of problems for Communist leaders who would be expelled or even executed. In both cases the USSR took a different order of actions. In Hungary Soviet Troops went in straight away and fighting took place. ...read more.

He introduced some of the reforms demanded by the Hungarian people but remained in the Warsaw Pact. In Czechoslovakia the mood from a pro-Soviet country turned to one, which resented the Soviets. Ideas of reforms were silences and the Brezhnev Doctrine took place. This forbade any Communist country to leave the Warsaw Pact and set up any other government party's. Overall in my opinion the basic draw round of both events was similar. A revolt occurs as people are frustrated with the rule, new leaders, new reforms and the Soviet negative response with the countries go back to were they started. When the details come in however situation begin to different at the level of frustration the type of reforms the order of actions taken place and so on. I think the situations are more similar then different though since both countries had the same basics. ...read more.