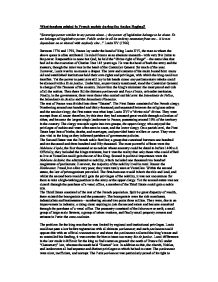 Whattensions existed in French society during the Ancien Regime?

What tensions existed in French society during the Ancien Regime? "Sovereign power resides in my person alone...; the power of legislation belongs to be alone. To me belongs all legislative power. Public order in all its entirety emanates from me... it is not dependant on or shared with anybody else..." Louis XV (1766) Between 1774 and 1792, France lay under the hand of King Louis XVI, the man to whom the above quote is often attributed. He ruled France as an absolute monarch - with very few limits to his power. Responsible to none but God, he held the "divine right of kings" - the same idea that had led to the execution of Charles I but 143 years ago. He was the head of both the army and the treasury, though the latter was in the hand of the Controller General for much of the year. However, Louis was by no means a despot. The laws and customs of his realm bound him: many old and established institutions held their own rights and privileges, with which the king could not interfere. Yet the power to pass laws still lay in his hands alone: any parliamentary rebuke could be silenced with a lit de justice. ...read more.

Louis could not pass a law before registration with all thirteen parlements; and each parlement could oppose this with an official remonstrance: and since the parlements collected the king's taxes and so controlled his funding, it was unwise for him to issue too many lits de justice. Local differences in the law made it difficult for the king to find common ground: the north of France fell under "Customary" law, whereas the south held "Roman" law. In addition to this, the church, Nobles, and landowners all had separate and distinct privileges to which he had to cater. The parlements were slow, inefficient, and corrupt. The Paris parlement was particularly proud of its right to remonstrate, and so to effectively pass laws it took months. Another condition that held back change was the lack of communications between the areas of France- it made it difficult to execute government business effectively. The financial system was in chaos - widespread abuse of the tax system led to dislike since many groups were exempt from it. This led to problems with a lack of a centralised treasury: debts could not be dealt with and if a lit de justice was issued to reform this, he would be seen as a despot and the parlements would cut his flow of taxes. ...read more.

The effects of these problems are intertwined. Perhaps the most serious long-term cause of the revolution that existed from the Ancien Regime is the burden put upon the Third Estate, which is the peasantry of the Third Estate, by the Bourgeoisie, the Clergy, and the Nobility. Taxation crippled their finances to such a point that they were sometimes unable to survive: the rest lived in economic destitution: the cahiers were proof of this problem. The corvee disheartened and irritated the peasantry: unpaid and hard, it was blight. The second most serious threat to French society was the inability for peaceful change. The king could not be an effective reformer without being seen as a despot; and issuing too many lits de justice would turn the parlements against him and remove his source of financial income. The corruption of the tax system and the lack of a centralised treasury meant that he could not cut funds to force the country into order, and he could not pay off any debt to get outside aid. Finally, a real problem for French society at this point was the connection, or rather the dislike of the connection with Rome. The lower clergy wanted a Gallican church to be formed, and the Tie with Rom also controlled the organisation of the clergy that had prevented the lower orders from gaining revenue from the tithes to spend on social reform. ...read more.