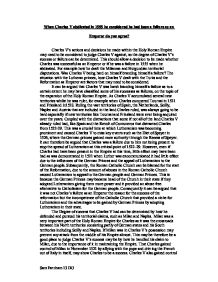 When Charles V abdicated in 1555 he considered he had been a failure as an Emperor do you agree?

When Charles V abdicated in 1555 he considered he had been a failure as an Emperor do you agree? Charles V's actions and decisions he made within the Holy Roman Empire may need to be considered to judge Charles V against, so the degree of Charles V's success or failure can be determined. This should allow a decision to be made whether Charles was successful as an Emperor or if he was a failure in 1555 when he abdicated. For example how he dealt the Milanese and Burgundian territorial disputations. Was Charles V being hard on himself branding himself a failure? The situation with the Lutheran princes, how Charles V dealt with the Turks and the Reformation as Emperor are factors that may need to be considered. It can be argued that Charles V was harsh branding himself a failure as to a certain extent he may have classified some of his successes as failures, on the topic of the expansion of the Holy Roman Empire. As Charles V accumulated several new territories whilst he was ruler, for example when Charles conquered Tournai in 1521 and Friesland in1523. Ruling the vast territories of Spain, the Netherlands, Scilly, Naples and Austria that are included in the land Charles ruled, was always going to be hard especially if new territories like Tournai and Friesland were ever being acquired over the years. ...read more.

Therefore it can be stated that Charles was a success if he had the tactical prowess to conquer Genoa, with the knowledge of the large army that he would have at his disposal. Were Charles V successful in capturing Genoa. However, as is the case with Italian territories like Milan they may be easy to capture but yet difficult to hold as was shown in 1525. This was when Francis re took Milan, which could support Charles V being a failure as Emperor due to him being able to hold the important state of Milan. Moreover, though Charles managed a substantial victory at the Battle of Pavia in 1525 in which Francis I was captured and forced to surrender. Francis I may have only managed to gain Milan from Charles in 1525 because he had the help of the new pope Clement VII and that Charles was in Madrid at the time, not because Charles was a failure as an Emperor. The Turks began to pose a serious problem to Charles in 1526 when they invaded Hungary, which had traditionally been the buffer state between the Ottoman Empire and the Holy Roman Empire. When the Turks routed Hungary and kill the Hungarian king Lewis along with most of the Hungarian nobility at the Battle of Mohacz in 1526, it put the Turks on the border of the Holy Roman Empire now they occupied Hungary. ...read more.

Nevertheless, Charles V could have done everything in his power to milk the capture of Francis and cannot really be blamed for Francis I not keeping his word, due to there being nothing Charles V could do to ensure Francis did not break the Treaty of Madrid. This may have been due to Francis I motivation to uphold his territorial claims to Burgundy and Milan to prove himself as a ruler and the urge to overcome Charles V, whom Francis I may have seen as overshadowing him due to the mass of territory Charles V ruled. In conclusion it can be argued Charles V did everything in his power to rule as Holy Roman Emperor successfully as the sheer size of the ever expanding territory that he had to rule, limited his success or anyone else in his position for that matter. Thus Charles may have been perhaps hard on himself judging himself as a failure as he had so much to rule it was always going to be hard ruling successfully. However, it can be argued he was a failure due to him taking too much on and not leaving incompetent people like his brother Ferdinand of Austria, to preside over important matters like the First Diet of Speyer in 1526. This is due to new problems such as the Recess of Speyer were created by leaving incompetent personnel in charge, which led to the German Princes gaining the upper hand over Charles V during the parts of the Reformation. Sam Farnham 13 DG ...read more.