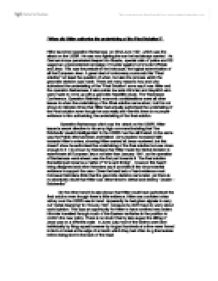 &quot;When did Hitler authorise the undertaking of the Final Solution

There is no doubt that by late august the killing of Jews was on a different scale. In June/ July most of the victims were shot individually by firing squad however by August hundreds at a time were forced to lie in or kneel at the edge of a trench which they had often dug themselves before being shot in the back of the head. The surge of the killings in the USSR meant that Hitler had yet decided to kill all of Europe's Jews; historians think Hitler's decision came later. "Everything suggests that there was a decision making process lasting several weeks before the fatal verdict was handed in September" By September 1941 the mass slaughter of Russian Jews was well underway. Himmler and Heydrich was asked by Hitler to come up with a genocide "feasibility study" after all it was illogical to kill Russian Jews and then transport Polish Jews. It can be said that Himmler and Heydrich are as much to do with authorising the undertaking of the final solution once Hitler had asked them to plan genocide. ...read more.

By the end of 1942 Himmler's goal of exterminating all the polish Jews had been largely achieved. Auschwitz which was originally created as camp for Polish prisoners was expanded in to an enormous labour camp. The exact number of Jews who died in the holocaust will never be known... Hitler declared that the killing of Europe's Jews was the most significant work he bequeathed to the German people. This all comes back to "when did Hitler authorise the undertaking of the final solution" there is not much proof of him authorising it, but it came underway when Operation Barbarossa came about. He also had to help through deciding and planning the final solution if Hitler is to blame, Himmler would be equally to be blamed for taking out tasks, but on the other hand Himmler says he ensured that Hitler's orders were carried out. It maybe that Hitler and Himmler, despite their intense anti-Semitic convictions, felt some unease about the mortality of their actions, whether their intense convictions lessen their guilt is a debate which is likely to continue as a longer as there are people on this planet. ?? ?? ?? ?? ...read more.