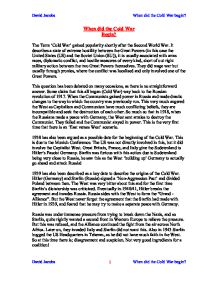 When did the Cold War Begin?

When did the Cold War Begin? The Term 'Cold War' gained popularity shortly after the Second World War. It describes a state of extreme hostility between the Great Powers (in this case the United States (US) and the Soviet Union (SU)), it is usually associated with arms races, diplomatic conflict, and hostile measures of every kind, short of out right military action between the two Great Powers themselves. They did wage war but usually through proxies, where the conflict was localised and only involved one of the Great Powers. This question has been debated on many occasions, as there is no straightforward answer. Some claim that this all began (Cold War) way back to the Russian revolution of 1917. When the Communists gained power in Russia and made drastic changes to the way in which the country was previously run. This very much angered the West as Capitalism and Communism have much conflicting beliefs, they are incompatible and seek the destruction of each other. ...read more.

Eventually in 1940/41, Hitler breaks the agreement and invades Russia. Russia sides with the West to form the "Grand -Alliance". But the West never forgot the agreement that the Starlin had made with Hitler in 1939, and feared that he may try to make a separate peace with Germany. Russia was under immense pressure from trying to break down the Nazis, and so Starlin, quite rightly wanted a second front in Western Europe to relieve the pressure. But this was refused, and the Alliance continued the fight from the air across North Africa. Later on, they invaded Italy and Starlin did not want this. Also in 1943 Starlin bugged the US Headquarters in Teheran, as he did not have much faith in the West. So at this time there is; disagreement and suspicion. Not very good ingredients for a coalition! Some claim that 1945 was when the Cold War started. This is because the Grand Alliance falls apart, and most importantly the US drops the Atomic bombs over Japan. ...read more.

Russia refused. Most politicians believe that the war began in 1949. During this time the North Atlantic Treaty Organisation (NATO) had been devised due to the brinkmanship of the Berlin Blockade. (Where Starlin had ordered a full blockade of all land-based access routes into Berlin). So now the crisis had escalated to the point of maximum confrontation. Before this time the US had been the only state to have weapons of mass destruction (WMD). Hence, the world international system being unipolar. But by 1949 Russia had created their own WMD, and so the world was now 'bipolarity' and there was a sense of a stalemate between these two Great Powers of the world. So when did the Cold War begin? Personally I do not believe that there is specific time or date that could be pinpointed as start. But, the war was the consequence of the many different disagreements that East and West had endured over the years. So these many factors contributed and finally created the war. David Jacobs When did the Cold War begin? 1 David Jacobs When did the Cold War begin? ...read more.