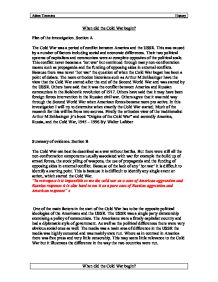 When did the Cold War begin?

When did the Cold War begin? Plan of the investigation. Section A The Cold War was a period of conflict between America and the USSR. This was caused by a number of factors including social and economic differences. Their two political systems of capitalism and communism were at complete opposites of the political scale. This conflict never became a 'hot war' but continued through many non-confrontation means such as propaganda and the funding of opposing sides in external conflicts. Because there was never 'hot war' the question of when the Cold War began has been a point of debate. The more orthodox historians such as Arthur M Schlesinger have the view that the Cold War started after the end of the Second World War and was started by the USSR. Others have said that it was the conflict between America and Russian communists in the Bolshevik revolution of 1917. Others have said that it may have been foreign forces intervention in the Russian civil war. Others agree that it was mid way through the Second World War when American forces became more pro active. In this investigation I will try to determine when exactly the Cold War started. Much of the research for this will be from two sources. ...read more.

The two main missing factors were, firstly around the time of the revolution the country was in a civil war and the USSR did not exist. This meant that there was not the powerful soviet state for the Americans to fear. Secondly because the USSR did not exist there was no war of propaganda or the funding of external communist movements that caused the majority of friction between the two countries later in the Cold War. This desire for expansionism was to cause America increasing concern later. When in 1922 Russia merged with five neighbouring states to form the Soviet Union. By 1936 five more states joined. This meant that in less than 15 years Russia had amassed an area the size of Europe. At this time there were increasing signs that America and the USSR were become more and more uneasy. The USSR's expansionism was starting to threaten the rest of Europe there was continuing talk of a communist revolution in countries such as Germany. But again as at the 1917 revolution there was not any public statement from either side that there was a disagreement from either side. The Second World War was also an important factor in this. The Yalta and Potsdam conferences where allied leaders and Stalin met could be seen as the starting point of the Cold War. ...read more.

This means that the most likely start of the Cold War was just after the Potsdam conference. Although there was little propaganda all the other elements were there and it was the first time that the serious differences between the USSR and America became obvious. The time frame found in this conclusion supported by the two texts I choose to focus on. Although they state different events for the start the time frame is the same. in the 'Origins of the Cold War' the start of the cold war is portrayed as "The point of no return came on July 2, 1947, when Molotov, after bringing 8 technical specialist with him to Paris and evincing initial in the project for European reconstruction, received the hot flash from the Kremlin denounced the whole idea and walked out of the conference. "s Were as in America, Russia and The Cold War the start of the cold war is implied as "The Cold War began with the almost simultaneous "declarations of Cold War" by Comrade Stalin and Prime Minister Churchill in 1946, followed by President Truman in 1947."l p. 39 List of sources The origins of the Cold War 1941 - 1949 second edition Martin McCauley Cold War Europe 1945 -1991 a political history second edition John w young On Every Front: The Making of the Cold War Thomas G. Paterson (1979) Adam Timmins History When did the Cold War begin? ...read more.