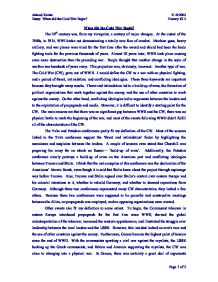 When did the Cold War Begin?

When did the Cold War Begin? The 20th century was, from my viewpoint, a century of major changes. At the outset of the 1900s, in 1914, WWI broke out demonstrating a totally new face of combat. Machine guns, heavy artillery, and war planes were tried for the first time after the sword and shield had been the basic fighting tools for the previous thousands of years. Almost 20 years later, WWII took place causing even more destruction than the preceding war. People thought that another change in the style of warfare was hundreds of years away. This projection was, obviously, incorrect. Another type of war, The Cold War (CW), grew out of WWII. I would define the CW as a war with no physical fighting, and a period of threat, intimidation, and conflicting ideologies. These three keywords are important because they brought many results. Threat and intimidation led to a build-up of arms, the formation of political organizations that work together against the enemy, and the use of other countries to work against the enemy. ...read more.

Other events also fit my definition to some extent. To begin, the Communist takeover in eastern Europe introduced propaganda for the first time since WWII, showed the global misinterpretation of the takeover, increased the western apprehension, and illustrated the struggle over leadership between the local leaders and the USSR. However, this incident lacked an arm's race and the use of other countries against the enemy. Furthermore, Greece became the highest point of tension since the end of WWII. With the communists sparking a civil war against the royalists, the USSR backing up the Greek communists, and Britain and America supporting the royalists, the CW was close to changing into a physical war. In Greece, there was certainly a great deal of arguments between leaders, as well as the use of Greece by the powers to attack each other. On the contrary, there was no build-up in arms and only some weak propaganda. The Truman Doctrine is another example of conflicting ideologies and mutual fear because the US launched it for the west's protection whereas the USSR saw the doctrine as a military alliance against it. ...read more.

Moreover, as shown in the sources, negating facts and statistics about the blockade and the airlift boosted the amount of propaganda to the peak. At the highest point of the struggle, the NATO was formed, a military organization comprising several countries against the USSR. The NATO frightened Stalin and encouraged and arms race on both sides. Therefore, I conclude that the Cold War was definitely underway by the Berlin Blockade. The Berlin Blockade was a climax of many actions that led up to it. Because it was the climax, the other events were lacking some extra characteristics to make them significant enough to start a war. Of course this is only my opinion if I had to choose only one event. Otherwise I would say that it is almost impossible to choose one definite event. One reason is that the list of criteria that I depended on to reach my conclusion is not perfect and maybe incomplete. Therefore, using another list could bring me to another conclusion. Historians until today debate their different viewpoints on the CW. Ahmed Kelani 3/10/2002 Essay: When did the Cold War Begin? History IG 2 Page 1 of 2 ...read more.