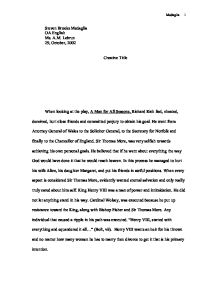 When looking at the play, A Man for All Seasons, Richard Rich lied, cheated, deceived, hurt close friends and committed perjury to obtain his goal.

Steven Brooks Medaglia OA English Ms. A.M. Lebrun 29, October, 2002 Creative Title When looking at the play, A Man for All Seasons, Richard Rich lied, cheated, deceived, hurt close friends and committed perjury to obtain his goal. He went from Attorney General of Wales to the Solicitor General, to the Secretary for Norfolk and finally to the Chancellor of England. Sir Thomas More, was very selfish towards achieving his own personal goals. He believed that if he went about everything the way God would have done it that he would reach heaven. In this process he managed to hurt his wife Alice, his daughter Margaret, and put his friends in awful positions. When every aspect is considered Sir Thomas More, evidently wanted eternal salvation and only really truly cared about him self. King Henry VIII was a man of power and intimidation. He did not let anything stand in his way. Cardinal Wolsey, was executed because he put up resistance toward the King, along with Bishop Fisher and Sir Thomas More. Any individual that caused a ripple in his path was executed. "Henry VIII, started with everything and squandered it all..." ...read more.

He does not care about his life hear on earth or what he leaves behind he just wants what is best for himself. Hence, Sir Thomas More attitude toward his family's life was very poor. By talking about the King and by not siding with him he threw his life and his families life out the window. For food he made Alice eat mutton and did not provide for his family. Also, by him thinking of resigning his position is another example of himself being selfish and not providing for his family. His selfish acts towards himself hurt his friends and his family and do not justify his means for eternal salvation. Firstly, Richard Rich does not justify his means by his ends at all. This man is a lying deceiving little man that will do whatever it takes to gain rank and power. His betrayal towards Sir Thomas More was very futile in Sir Thomas's conviction. "I've lost my innocence."(pg.44) Rich has just sold out information to Cromwell in order to move ahead in rank. From here on Rich is starting down a path that will lead to hurting a lot of people's lives. ...read more.

(pg.28) Henry is trying to put her down for showing her dominance over him. Also, Henry always wanted to be in power of the Church of England. This was the only thing that he was not in full complete control of and he needed to be to divorce Catherine for Anne Boleyn. The only way he could do this is to kill Cardinal Wolsey and clear the path for his dominance. Catherine provided him with a daughter and without an heir to the thrown this marriage and his legacy would not work. "Queen on the throne of England was unthinkable." (pg. Viii) The King had to have power over the Church of England because he would not receive a divorce if he did not receive a boy through Anne. Henry used intimidation to justify his goals and his means were not reasonable nor were his actions justified. With Sir Thomas More, Richard Rich and King Henry VIII all having their means not justify their actions it showed that they were all doing this for some self-advancement in life. So again clearly through points and quotes all three used reprehensible means which harm others, in order to achieve their own personal goals and in the end are never justified. Work Citied Bolt, Robert. A Man for All Seasons, Toronto: Irwin Publishing, 1963 1 1 Medaglia ...read more.