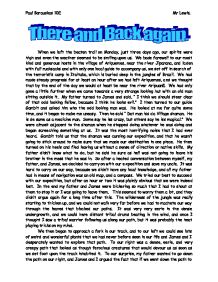 When we left the beaten trail on Monday

When we left the beaten trail on Monday, just three days ago, our spirits were high and even the weather seemed to be smiling upon us. We bade farewell to our most kind and generous hosts in the village of Ariquemes, near the river Jiparana, and laden with full rucksacks and with only one local guide to accompany us, we set off in search of the terrorist's camp in Itaituba, which is buried deep in the jungles of Brazil. We had made steady progress for at least an hour after we had left Ariquemes, and we thought that by the end of the day we would at least be near the river Aripuan�. We had only gone a little further when we came towards a very strange looking hut with an old man sitting outside it. My father turned to James and said, " I think we should steer clear of that odd looking fellow, because I think he looks evil." ...read more.

In the end my father and James were bickering so much that I had to shout at them to stop it or I was going to leave them. This seemed to worry them a lot, and they didn't argue again for a long time after this. The wilderness of the jungle was really starting to thicken up, and we could not walk very far before we had to machete our way through the leaves that blocked our paths. It was very very eerie in the dense undergrowth, and we could here distant tribal drums beating in the wind, and once I thought I saw a tribal warrior following us along our path, but it was probably the heat playing tricks on my mind. We then began to approach a fork in our track, and to our left we could see lots of weird and wonderful plants that we had never before seen in our life and James and I desperately wanted to explore that path. ...read more.

James managed to whisper to my father that he had overheard a rumour about the Watushi warriors. He said that he thought that they were a cannibalistic tribe and that we were to be the main banquet at their feast that evening. We were forced to walk along tough jungle paths for what seemed an eternity when all of a sudden we came across their camp, which was in the middle of a small clearing. We were then thrown into a small hut and given a small portable bowl to use as our lavatory. It is here that I have been able to write up my findings for the last few days. The Watushi warriors have now begun to light up the fires for this evenings banquet, and I now see no way out of our present predicament, I see no hope of completing our expedition nor, indeed, of ever returning home. ?? ?? ?? ?? Paul Barauskas 10E Mr Lewis. ...read more.