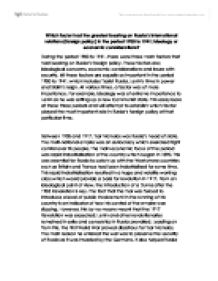 Which factor had the greatest bearing on Russia's international relations (foreign policy) in the period 1900 to 1941; ideology or economic considerations?

Which factor had the greatest bearing on Russia's international relations (foreign policy) in the period 1900 to 1941; ideology or economic considerations? During the period 1900 to 1941, there were three main factors that had bearing on Russia's foreign policy. These factors are; ideological concerns, economic considerations and issues with security. All these factors are equally as important in the period 1900 to 1941; which includes Tsarist Russia, Lenin's time in power and Stalin's reign. At various times, a factor was of more importance. For example, ideology was of extreme importance to Lenin as he was setting up a new Communist state. This essay looks at these three periods and will attempt to establish which factor played the most important role in Russia's foreign policy at that particular time. Between 1900 and 1917, Tsar Nicholas was Russia's head of state. The multi-national empire was an autocracy which exercised tight control over its people. ...read more.

It also helped Russia develop closer links with Britain and France which would boost Russian trade. All in all, the most important factor bearing on Russia's foreign policy between 1900 and 1917 was economic. Once Lenin took control after the 1917 October Revolution, Russia and the driving forces behind its foreign policy changed dramatically. Lenin made such a huge impact on the world during his time as the leader of the first ever successful communist revolution; the impression he left was predominately ideological and this was also the factor which played a huge role in his foreign policy. The exportation of communism was devised by Trotsky and supported by Lenin during the period 1917 to 1924. It was known as "The Permanent Revolution" and enjoyed brief success in Hungary, Slovakia and Bavaria. The Comintern was set up to influence and aid other European Communist parties. ...read more.

Stalin discarded NEP and introduced a policy of rapid industrialisation via a number of his famous "5 Year Plans". The result of this was that Russia became the world's second greatest industrial power. Therefore, economic considerations were a key element to the development of Stalin's foreign policy. Stalin knew that the USSR had ideological enemies who may attack at any time so when considering the extent to which ideology and security affected Stalin's foreign policy one must look at his change in policy from The Permanent Revolution to "Socialism in One Country". Lenin and Trotsky's Comintern experienced being downgraded in importance. The result of this was a more secure USSR in Stalin's eyes. In conclusion, these three distinct periods in Russia's history between 1900 to 1941 were characterized by the need to industrialize, strict control within Russia and the desire to prevent being attacked from the East or the West. The three different leaders went about achieving their goals in different ways but in the end the economic, security and ideological factors were all of significance when developing foreign policy. ...read more.