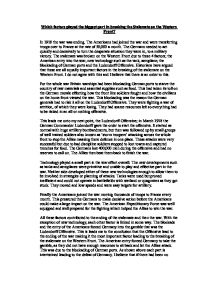 Which factors played the biggest part in breaking the Stalemate on the Western Front?

Which factors played the biggest part in breaking the Stalemate on the Western Front? In 1918 the war was ending. The Americans had joined the war and were transferring troops over to France at the rate of 50,000 a month. The Germans needed to act quickly and decisively to turn the desperate situation they were in, to a military victory. The stalemate was broken on the Western Front due to these 4 factors; the American entry into the war, new technology such as the tank, aeroplane; the blockading of German ports and the Ludendorff Offensive. Historians have argued that these are all equally important factors in the breaking of the stalemate on the Western Front. ...read more.

It started as normal with huge artillery bombardments, but then was followed up by small groups of well trained soldiers also known as 'storm troopers' attacking across the whole front to stop the Allies massing there defence in one place. These attacks were very successful but due to bad discipline soldiers stopped to loot towns and captured trenches for food. The Germans lost 400,000 men during the offensive and had no reserves to call on. The Allies then beat them back to finish the war. Technology played a small part in the war effort overall. The new developments such as tanks and aeroplanes were primitive and unable to play and effective part in the war. ...read more.

The blockade and the entry of the Americans forced Germany into the gamble that was the Ludendorff Offensive. This is leads me to the conclusion that the Offensive lead to the ending of the war making it the most important factor leading to the breaking of the stalemate on the Western Front. The American entry forced Germany to take the gamble, as they did not have enough resources to sit back and let the Allies attack. This was due to the blockading of German ports. As shown above each part is intertwined leading to the defeat of Germany. I believe that if there had been no technological advancements such as the tank and aeroplane the stalemate would of still been broken, but if there had been no blockade or the Americans had decided against joining the war there could have been an entirely different outcome. By Nathan Flye ...read more.