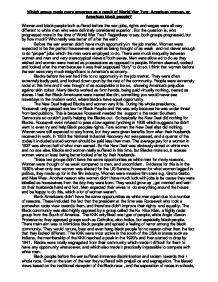 Which group made more progress as a result of World War Two: American women, or American black people?

Which group made more progress as a result of World War Two: American women, or American black people? Women and black people both suffered before the war; jobs, rights and wages were all very different to white men who were definitely considered superior. But the question is, who progressed more in the time of World War Two? Regardless to say, both groups progressed, but by how much? Who really was better off after the war? Before the war women didn't have much opportunity in the job market. Women were expected to be the perfect housewives as well as being thought of as weak and not clever enough to do "proper" jobs which the men were employed to do. There was much inequality between women and men and very stereotypical views of both sexes. Men were allowed to do as they wished and women were treated as possessions as opposed to people. Women cleaned, cooked and looked after the men because it was their supposed "duty" to do so. I think that women before the war were very much insignificant to America's economy. Blacks before the war had little to no opportunity in the job market. They were often extremely badly paid, and looked down upon by the rest of the community. ...read more.

Blacks were totally segregated from their community which made it difficult for them to have any opportunity whatsoever, and which also made it practically impossible to compete with white men. Black people before the war suffered immense discrimination and racism towards their whole race. Even at the start of the war they suffered with prejudice and segregation. The biased views based on the traditional viewpoint of the Black race, and the separation of races in schools, restaurants, transport etc. cut black people off from the rest of the world, and all because of the colour of their skin. Black Americas campaigned for civil rights during the war with many non-violent protests organised by the Congress of Racial Equality, and when there were plans for a protest involving 100,000 people, President Roosevelt was forced to ban discrimination against Blacks in government and industrial jobs and set up the Fair Employment Practise Committee. The government also tried to help Blacks by tracking down businesses who didn't employ them and threatening not to give contracts to these firms unless they changed their ways. The discrimination laws against Blacks did not apply to the Armed Forces and at the start of the war, the Army would not train Black Officers. Blacks in the Air Force could not be pilots and blacks in the Navy could only work in the kitchens. ...read more.

I think the most important bit of permanent progress though, was that by the end of the war, four states had made equal pay for women compulsory which was a big step forwards as this showed that women's rights were on the rise. For Black people, there was also change. They were now accepted in the defence industry as well as a few other lines of work. Their pay was still less than white men but they were becoming part of the society that had previously rejected them. Unfortunately, there was still a lot of discrimination and the change that the war had brought was not all permanent. So who made the most significant progress as a result of World War Two? Well, in my opinion it is easy to say that women did. Although Black people were becoming more accepted n society, and their rights were improving, women had much ore permanent change and a better deal overall. Women were now being recognised as individuals as opposed to men's possessions, and they were being paid more in certain parts of America. They became more respected in the workplace and at home and the numbers of working women just kept increasing, between 1940 and 1960 the percentage of married women with jobs almost doubled. As a result of World War Two and the opportunities given to them, women became much more independent and progressed mo than the Black community. ...read more.