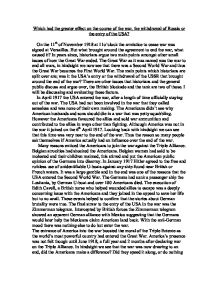 Which had the greater effect on the course of the war, the withdrawal of Russia or the entry of the USA?

Which had the greater effect on the course of the war, the withdrawal of Russia or the entry of the USA? On the 11th of November 1918 at 11o'clock the armistice to cease war was signed at Versailles. But what brought around the agreement to end the war, what caused it? In years since, historians argue two main points amongst other small issues of how the Great War ended. The Great War as it was named was the war to end all wars, in hindsight we now see that there was a Second World War and thus the Great War becomes the First World War. The main points which historians are split over are; was it the USA's entry or the withdrawal of the USSR that brought around the end of the war? There are other issues that historians and the general public discuss and argue over, the British blockade and the tank are two of those. I will be discussing and evaluating these factors. In April 1917 the USA entered the war, after a length of time officially staying out of the war. The USA had not been involved in the war that they called senseless and was none of their own making. The Americans didn't see why American husbands and sons should die in a war that was petty squabbling. However the Americans favoured the allies and sold war ammunition and contributed to the allies in ways other than fighting. ...read more.

I don't believe that any fighting contribution helped win the war but I do believe the Americans entering helped the war. Had they not entered the war a stalemate may have carried on just as the war had been before. A.A.J.P Taylor states 'Americas influence was over stated'. This may have been through cold war propaganda where America was influencing Britain and showing their power, they may have exaggerated their part in the war. Russia was also made to look bad because of the anti-communism propaganda and negativity towards Russia during the cold war. The exit of Russia, historians argue, is also one of the main reasons the war ended. The Russians left the Second World War to pursue Lenins slogan of 'Bread Land Peace' to carry on fighting in the war that seemed pointless and drained them of resources would have been fatal to Lenin and his new policies. Russia signed the treaty of Brest Litovsk with Germany giving them a large amount of land in exchange for peace. The exit of Russia in March 1918 meant that Germany had only one front to fight on and more armed forces that were previously on the eastern front could now fight on the western front. And the scales were briefly tipped for the Triple Alliance. The Germans, only having to fight on one front pushed for one last victory over France and Britain using all their troops, power and resources (operation Michael). ...read more.

The Kaisers Germany was becoming weak; people were losing faith in their leader and his war that was starving the whole country. These two last points are very important to the war in other ways than fighting and resources. The British blockade was more important than the tank as it helped to starve the German people who then lost faith in their leader Kaiser Wilhelm. A weak country unwilling to fight was not what the country needed to win the war. I believe that the end of the war was not caused by one singular event, but by an interlinked pattern of causation. The war of attrition, raging for 4 years was brought to and end by a pattern, every cause fits together to form the end of the war. Had one of the factors above not been incorporated in the events of 1914-1918 then I believe that the war would have had a very different out come. The absence of the British blockade for example may have caused Germany/the triple alliance to succeed in the war. I believe that the withdrawal of Russia and the entry of the USA are the main factors that contributed to the end of the war of grinding down. The exit of Russia may have caused the war to end differently had the USA not entered soon after. The pattern of events leads to the outcome of the war being one of victory for the triple Entente. I think all the factors are in the network with the smaller issues causing the armistice to be signed on 11th of November. ...read more.