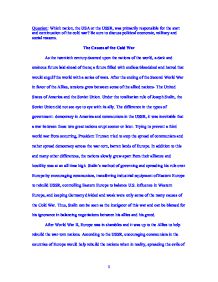 Which nation, the USA or the USSR, was primarily responsible for the start and continuation of the cold war? Be sure to discuss political economic, military and social reasons.

Question: Which nation, the USA or the USSR, was primarily responsible for the start and continuation of the cold war? Be sure to discuss political economic, military and social reasons. The Causes of the Cold War As the twentieth century dawned upon the nations of the world, a dark and ominous future laid ahead of them; a future filled with endless bloodshed and hatred that would engulf the world with a series of wars. After the ending of the Second World War in favor of the Allies, tensions grew between some of the allied nations- The United States of America and the Soviet Union. Under the totalitarian rule of Joseph Stalin, the Soviet Union did not see eye to eye with its ally. The difference in the types of government- democracy in America and communism in the USSR, it was inevitable that a war between these two great nations erupt sooner or later. ...read more.

evils of communism does nothing but fuel the beginning of another world war and begin another era of adversity for the world. Because of the difference in governments between the United States and the Soviet Union, Truman and Stalin almost never reached a concord on anything- especially the spreading of communism or democracy in Europe. In Stalin's views, he wanted to encourage communism in other countries as part of the worldwide struggle between workers and the wealthy. In reality, communism is a futile method of government with no progress- although seeming to be successful at first, the government will be fruitless in its accomplishments and just fuel poverty in the nations where communism hold as the main government. Thus, Stalin's political ignorance in governing nations with communism was a key factor in the beginning of the Cold War. Another cause of the Cold War was its greed in military dominance in Europe and Asia. ...read more.

The USSR's avarice in economic gains spurred distrust amongst its allies and brewed tensions in the already hostile camps of the Allies. With such hostility growing, it was inevitable that another war to occur. Although both the United States and the Soviet Union was not in accord when it came to anything and almost everything, it was ultimately the Soviet Union's leader, Joseph Stalin, who pushed the United States into war. The Soviet Union caused unrest in Europe and stepped out of line in its alliance with the victors. Soviet Union's greed ultimately started the war and can be seen as the main cause of the Cold War. Thus, the USSR's greed in money, military dominance, and rule finally broke the few strings that kept the alliance in check and caused the eruption of the Cold War. By: John Chun 1 ...read more.