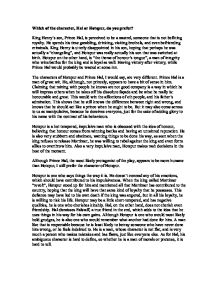 Which of the character, Hal or Hotspur, do you prefer?

Which of the character, Hal or Hotspur, do you prefer? King Henry's son, Prince Hal, is perceived to be a wastrel, someone that is not befitting royalty. He spends his time gambling, drinking, visiting brothels, and even befriending criminals. King Henry is utterly disappointed in his son, hoping that perhaps he was actually a "changeling", and Hotspur was really actually his son that was switched at birth. Hotspur on the other hand, is "the theme of honour's tongue", a man of integrity who wins battles for the king and is loyal as well. Having victory after victory, while Prince Hal would probably be wasted at some inn. The characters of Hotspur and Prince Hal, I would say, are very different. ...read more.

But it may also come across to us as manipulative, because he deceives everyone, just for the sake of adding glory to his name with the contrast of his behaviours. Hotspur is a hot-tempered, impulsive man who is obsessed with the idea of honour, believing that honour comes from winning battles and having an untainted reputation. He is also very stubborn and obstinate, wanting things to be done his way, as seen when the king refuses to release Mortimer, he was willing to rebel against the king and even form allies to overthrow him. Also a very impulsive man, Hotspur makes rash decisions in the heat of the moment. Although Prince Hal, the most likely protagonist of the play, appears to be more humane than Hotspur, I still prefer the character of Hotspur. ...read more.

Hotspur may be a little short-tempered, and has negative qualities, he is one who cherishes kinship. Hal, on the other hand, does not cherish even friendship. Hal dismisses Falstaff, a true friend in the end, which adds to the idea that he uses things in his way for his own gains. Although Hotspur is one who would most likely hold grudges, he is also one who would remember what another had done for him. A man like that is respectable because he is least likely to betray someone who have never done him wrong, or he feels indebted to. He is a man, whose character is not flat, and is very much a person who makes mistakes and has flaws, just like everyone else. As for Hal, his ambiguous character is hard to define, so whether he is a man of morals or pretense, it is hard to tell. ...read more.