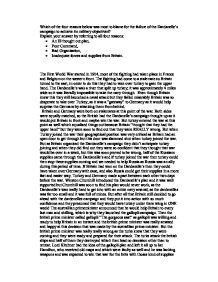 Which of the four reasons below was most to blame for the failure of the Dardanelle's campaign to achieve its military objectives?

Which of the four reasons below was most to blame for the failure of the Dardanelle's campaign to achieve its military objectives? Explain your answer by referring to all four reasons: * An Ill thought out plan, * Poor Command, * Bad Organisation, * Inadequate forces and supplies from Britain. The First World War started in 1914, most of the fighting had taken place in France and Belgium on the western front. The fighting had come to a stalemate so Britain turned to the east, in order to do this they had to take over turkey to gain the upper hand. The Dardanelle's was a river that split up turkey; it was approximately 4 miles wide so it was literally impossible to take the navy through. Even though Britain knew this they still launched a naval attack but they failed miserably Britain was so desperate to take over Turkey, as it was a "gateway" to Germany as it would help surprise the Germans by attacking them from behind. Britain and Germany were both on stalemates at this point of the war. Both sides were equally matched, so the British had the Dardanelle's campaign thought up as it would put Britain in front and maybe win the war. But turkey entered the war at this point as well which equalised things out because Britain "thought that they had the upper hand" but they were soon to find out that they were REALLY wrong. ...read more.

The generals that were leading the troops were very badly trained and didn't have much experience or imagination. When the british came to fight they underestimated the strength and size od the campaign, for the brits this was a really big surprise. Sir William birdwood of australlia claimed the dardenelles campaign needed four points if it were to succeed;- * Keep troops hidden, * Use covering fire to protect troops, * Always control the soldiers and then fire, * Keep good communications! But these ideas were ignored very often which lead the war council in London to argue and the best way to attack, but they decided that there would be no supreme leader and they decided that they should have a separate department for each leader I.E: Navy, Army e.t.c The A.N.Z.A.C troops were told to attack the Turkish trenches, but hey really underestimated the strenth of the turks as they had been practising and training as they knew that they would be attacked and they were ready to accept this challenge head on. The A.N.Z.A.C troops were told to believe victory at all costs but this was a bad strategey as it puts a lot of pressure on not be able to perform at their best. That's why not a single soldier even though it was only about 10 metres away from them. ...read more.

They were refused to send troops to the western front, as it was too dangerous. A.N.Z.A.C troops were taken from Egypt and again these troops were poorly organised. The soldiers had no naval back up at the landings and there were either killed, drowened or blown away before reeachin the shore. A.N.Z.A.C troops were very brave and carried on fightening and eventually made their way up the clifs, but all their efforts failed. Soldiers were thinly spread out over long distances and were told to attack. Now this is just terrible as obviously hard to win an invasion. Soldiers did not have enough food or weapons. The brits thought that this invasion would be over and won in one single week and underestimated the turks strength. Many austraillians felt the british had let them down as the british did no back them up as much they should have and the british didn't supply them with enough resources and nessities to get through this rampage. Having studied the evidence I believe that bad organisation was the core of all the problems in the dardenelles campaign. As I think that was the only reason why this campaign failed as from bad organisation came other problems such as "poor command, an ill thought out campaign and inadequate forces and supplies from Britain," as it was all connected I think for a second that if everything was planned and prepared then there would be no reason for the british to loose at turkey so terribly! ...read more.