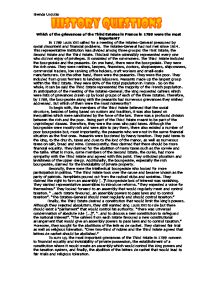 Which of the grievances of the Third Estates in France in 1789 were the most important?

Which of the grievances of the Third Estates in France in 1789 were the most important? In 1789 Louis XVI called for a meeting of the Estates-General pressured by social discontent and financial problems. The Estates-General had not met since 1614. This representative institution was divided among three groups: the First Estate, the Second Estate and the Third Estate. This last Estate ostensibly represented every one who did not enjoy of privileges. It consisted of the commoners. The Third Estate included the bourgeoisie and the peasants. On one hand, there were the bourgeoisie. They were the rich ones. They were rentiers, lawyers, financiers, doctors, shopkeepers, ship-owners, commercial traders, low ranking office holders, craft workers and small-scale manufacturers. On the other hand, there were the peasants. ...read more.

Being part of the Third Estate meant to be part of the unprivileged classes. Therefore, they were the ones who paid taxes. Although the bourgeoisie were mostly rich and were able to pay them, there also existed a number of poor bourgeoisie but, most importantly, the peasants who were not in the same financial situation as the first ones. Peasants were burdened by heavy taxation. They paid taxes to the king, to the church, taxes and dues to the lord of the manor, as well as numerous taxes on salt, bread and wine. Consequently, they claimed that there should be more financial equality. They claimed for the abolition of many taxes such as the corv�e and the taille. What is more, some members of the Second Estate, the cur�s, had more sympathy with the Third Estate and agreed with this point. ...read more.

"There was universal condemnation of absolute rule [...]". "...and to discuss a new constitution to safeguard the national interest". "The cahiers from each Estate favoured a new constitutional arrangement that would give an assembly powers to pass laws and to control taxation." Moreover, they sought for the abolitions of the lettres de cachet. They claimed fair trial as well as religious toleration. "Over two-third of nobles and the Third Estate agreed that lettres de cachet should be abolished." To sum up, the most important grievances of the Third Estate in 1789 concern to financial equality and inviolability of private possession, the establishment of a constitution where it would create an assembly which would control the king powers and the taxation system, and finally, the abolition of the letters de cachet that would lead to fair trials and religious toleration. ?? ?? ?? ?? Brenda Urquizo ...read more.

The author has good knowledge of the subject area and writes well but the links to the question could be clearer in places and quotations could be used less heavily. 4 out of 5 stars.