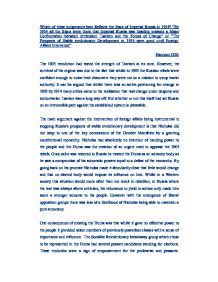 Which of these judgements best Reflects the State of Imperial Russia in 1914? By 1914 all the Signs were there that Imperial Russia was heading towards a Major Confrontation between intransient Tsarism and the Forces of Change or

Which of these judgements best Reflects the State of Imperial Russia in 1914? "By 1914 all the Signs were there that Imperial Russia was heading towards a Major Confrontation between intransient Tsarism and the Forces of Change" or "The Prospects of Stable evolutionary Development in 1914 were good until Foreign Affairs Intervened" Hanoom 13Sh The 1905 revolution had tested the strength of Tsarism at its core. However, the survival of the regime was due to the fact that whilst in 1905 the Russian rebels were confidant enough to voice their discontent they were not on a mission to usurp tsarist authority. It can be argued that whilst there was an active petitioning for change in 1905 by 1914 many critics came to the realisation that real change under despotic and authoritarian Tsarism was a long way off. But whether or not this itself had set Russia on an irreversible path against the established system is debatable. The main argument against the intervention of foreign affairs being instrumental in stopping Russia's prospects of stable evolutionary development is that Nicholas did not keep to one of the key concessions of the October Manifesto by a granting constitutional monarchy. Nicholas had absolutely no intention of handing power to the people and the Duma was the creation of an urgent need to appease the 1905 rebels. ...read more.

But partly the innate conservatism of the Russian people meant that this lack of strong alternative leadership to Nicholas in 1914 was something that resulted in any critics of the regime being unsure of whom to support. The opposition was inherently disunited and the alliances of different social groups were hard to fathom in a society where traditional division had always stood between the upper and lower classes. Another explanation for the failure of groups like the Kadets and the Liberals to gain the active support of the public is that their concern for securing a constitution subordinated the social welfare of the people who did not feel that their cause was being fought for. By 1914 the opposing parties to the tsarist regime were much less powerful than in 1905. The liberals were no longer seen as revolutionary and Witte's liberal concessions had split the opposition. Therefore anyone who wanted change did not think it achievable through a weak, liberal Duma with little influence. Consequently supporting the Bolsheviks in 1917 was a powerful alternative as it empowered a group of extremists willing to make vigorous changes. During the years 1908-1914 Russia was moving quickly forward, trying to develop its stagnant and backward economy. ...read more.

This was exacerbated by a power struggle between the Duma and Rasputin who was seen as manipulating the tsarina and steering the country closer to catastrophe. The war was the force, which interrupted Russia's progression into a more Western and developed society with better standards of living and equality. On the home front the food shortages, starvation in the big cities, coal shortages in the merciless Russian winter and inflation ensured a demoralised and exasperated population. The hopeless situation in Russia would later spark what was to be the end of tsarist Russia as Nicholas survived as long as he maintained the loyalty of the army and the Cossacks. Had it not been for the war these key groups would have remained loyal to Nicholas, especially due to the progressive and westward looking path that Russia was on. It is likely that at the end of Nicholas' reign the Duma would have become a far more influential body and that his royal successors would have paid greater heed to the advice of the assembly. Obviously it cannot be denied that a stronger and more prudent ruler than Nicholas would have survived the war, at the cost of making small concessions and curbing his autocratic power. Whilst this may have weakened the monarchy significantly it would have more importantly ensured its survival well into the 20th century. ...read more.