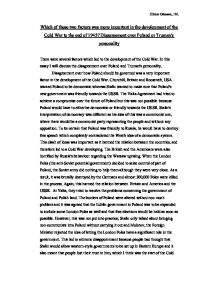 Which of these two factors was more important in the development of the Cold War to the end of 1945? Disagreement over Poland or Truman's personality

Which of these two factors was more important in the development of the Cold War to the end of 1945? Disagreement over Poland or Truman's personality There were several factors which led to the development of the Cold War. In this essay I will discuss the disagreement over Poland and Truman's personality. Disagreement over how Poland should be governed was a very important factor in the development of the Cold War. Churchill, Britain and Roosevelt, USA wanted Poland to be democratic whereas Stalin wanted to make sure that Poland's new government was friendly towards the USSR. The Yalta Agreement had tried to achieve a compromise over the future of Poland but this was not possible because Poland would have to either be democratic or friendly towards the USSR. ...read more.

As a result, it was brutally destroyed by the Germans and almost 300,000 Poles were killed in the process. Again, this harmed the relation between Britain and America and the USSR. At Yalta, they tried to resolve the problems concerning the government of Poland and Polish land. The borders of Poland were altered without too much problem and it was agreed that the Lublin government in Poland was to be expanded to include some London Poles as well and that free elections would be held as soon as possible. However, this was not put into practice; Stalin only talked about bringing non-communists into Poland without carrying it out and Molotov, the Foreign Minister rejected the idea of letting the London Poles have a significant role in the government. ...read more.

Also, Truman made it clear that he thought America was in a much stronger position than the USSR because they had the atomic bomb, which irritated the Soviet Union. However, the possibility of the Cold War was high whether Truman was like that or not. To conclude, I think that the disagreement over Poland was a lot more influential in the development of the Cold War. As these two reasons are linked, they are both important. Although the hostility that arose due to Truman's treatment of Molotov and how he acted at Potsdam certainly played a part, the trust that was lost due to Stalin's failure to carry out his promises regarding Poland was a bigger factor and was a major cause of the Cold War. Ellinor Ottosson, 10L ...read more.