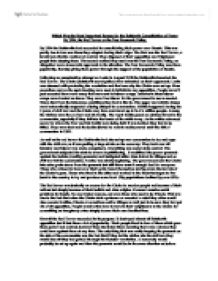 Which Was the Most Important Reason for the Bolshevik Consolidation of Power By 1924, the Red Terror or the New Economic Policy.

Which Was the Most Important Reason for the Bolshevik Consolidation of Power By 1924, the Red Terror or the New Economic Policy. By 1924 the Bolsheviks had succeeded in consolidating their power over Russia. This was partly due to two new ideas they adopted during their reign. The first was the Red Terror, a brutal yet effective method of control. They disposed of their opposition and frightened people into obeying them. The second method they used was the New Economic Policy, an altogether more democratic approach to the situation. The New Economic Policy won them popularity, thereby giving them power through the support of the population of Russia. Following an assassination attempt on Lenin in August 1918 the Bolsheviks launched the Red Terror. The Cheka (Bolshevik secret police) were unleashed on their opponents. Lenin was obsessed with protecting the revolution and that was why the Cheka were set up. Mass executions and on the spot shooting were used to intimidate any opposition. People weren't just executed there were many that were sent to labour camps. Inmates in these labour camps were treated as slaves. They were free labour for the government to use as needed. Many died from the inhumane conditions they had to live in. ...read more.

Everyone respected the Bolsheviks because they had to. No one knew if a Cheka spy was watching and planning their execution. True communists supported this choice totally as it was sticking to communism even if it was a little harsh on the economy, but everyone else just wanted an end to the war and the famine. Although the Bolsheviks maintained their control and consolidated their power to an extent, it would only last temporarily. As soon as the civil war ended the peasants would revolt and demand an end to the famine. It was the Kronstadt rising that led directly to the New Economic policy being introduced, however Lenin had realised a change of policy had been needed for a while. The Kronstadt rising in March 1921 was when the sailors at the naval base near Petrograd mutinied and demanded an end to the communist dictatorship and the forced grain seizures. Their fortress was stormed with 50,000 red army troops. Of the sailors, 2,000 were executed without trial, 8,000 fled the country and thousands more were sent to labour camps. These sailors had previously been supporters of communism. Trotsky himself had called them the pride and glory of the Russian revolution. ...read more.

If it hadn't of been for the civil war the peasants would have revolted against the grain seizures, as they did soon after the war. The only reason they stayed loyal to the Bolsheviks throughout was because it was their best option. If they had let the whites take over they would have lost all the gains they made through the October revolution. Whereas the NEP won the Bolsheviks true support from the majority of the population. The NEP sorted out the economy and some of the social issues in Russia and once again it was becoming a stable, peaceful country. Although there were some political problems because of disagreements about the NEP, overall it was a much better policy than the Red Terror. The Terror lost thousands of people their lives and everyone lived in fear; the country was wrought with famine and disease. It's as though the NEP cured all this. Russia was a difficult country to rule. So many people with so many views meant it was impossible to please everyone. Neither of these policies could keep everyone happy so it was best to use the one that kept the majority happy. The NEP was most important in consolidating the Bolshevik rule as it stabilised the country and kept most of the population happy and therefore happy with the way the country was being run and thus content with the Bolshevik rule. ...read more.