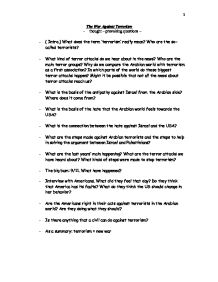 While surfing the channels on TV you might hear a lot of news about terror attacks. Only think of the latest tragedy in Moscow when a Chechen terrorist group occupied a theater full with tourists; or just think of bombings in Bali

The War Against Terrorism - thought - provoking questions - - ( Intro.) What does the term 'terrorism' really mean? Who are the so-called terrorists? - What kind of terror attacks do we hear about in the news? Who are the main terror groups? Why do we compare the Arabian world with terrorism as a first association? In which parts of the world do these biggest terror attacks happen? Might it be possible that not all the news about terror attacks reach us? - What is the basis of the antipathy against Israel from the Arabian side? Where does it come from? - What is the basis of the hate that the Arabian world feels towards the USA? - What is the connection between the hate against Israel and the USA? - What are the steps made against Arabian terrorists and the steps to help in solving the argument between Israel and Palestinians? - What are the last years' main happening? What are the terror attacks we have heard about? What kinds of steps were made to stop terrorism? - The big bum: 9/11. What have happened? - Interview with Americans. What did they feel that day? Do they think that America has its faults? What do they think the US should change in her behavior? - Are the Americans right in their acts against terrorists in the Arabian world? Are they doing what they should? - Is there anything that a civil can do against terrorism? - As a summary: terrorism = new war The War Against Terrorism "The attack took place on American soil, but it was an attack on the heart and soul of the civilized world. And the world has come together to fight a new and different war, the first, and we hope the only one, of the 21st century. A war against all those who seek to export terror, and a war against those governments that support or shelter them." ...read more.

Wouldn't that be easier to make two new countries: a Palestinians and an Israeli? Naturally, decades later we can be very clever (it's quite easy to say what would have been the perfect solution decades ago, but now, when everything is confused, everything is bungled, we are in a big trouble. How to agree with both sides?). If we want to be fair to both sides, our thinking would take this way. We could say that Palestinian are right, because they also live there (and according to he Bible they lived), they also want to have their own country. But now, when Israel exists, Jews are right in saying that they don't give any miles from their country because they built it. So, to be fair, everyone should accept that Israel is not the Jews', nor the Palestinians', but the Israelis'... In the next part of my paper I'd like to mention some examples from the last few years' terrorist attacks, and some examples from steps against terrorists. As a first step I would like to mention a few points from the history of terrorism in different parts of the world. Terrorism in Europe. Terrorism spread beyond the Middle East in the 1960s, particularly in nations such as West Germany and Italy, where transition from authoritarian rule to democracy after World War II had been rapid and traumatic. Inspired by Marxist and Maoist teachings, and supported by leftist sympathizers among the affluent middle classes, the terrorists aimed to bring about the collapse of the government by provoking its violent, self-destructive reaction. During the 1970's, the West German Red Army Faction, better known as the Baader-Meinhoff Gang, robbed banks, kidnapped and assassinated business and political leaders, and raided U.S. military installations. Members of this West German gang also cooperated with Palestinian terrorists, notably in the murder of the Israeli athletes at the Munich Olympics and the hijacking of an El Al plane in 1976. ...read more.

We have to stay realistic, and unite. I'm assuming that our goal is that we are interested in reducing the likelihood of such crimes whether they are against us or against someone else. 'What is the war against terrorism?' and a side question, 'What's terrorism?'. The war against terrorism has been described in high places as a struggle against a plague, a cancer which is spread by barbarians, by "depraved opponents of civilization itself." The words I'm quoting, however, happen to be from 20 years ago. Those are...that's President Reagan and his Secretary of State. The Reagan administration came into office 20 years ago declaring that the war against international terrorism would be the core of American foreign policy.... And it was the core of American foreign policy. The Reagan administration responded to this plague spread by depraved opponents of civilization itself by creating an extraordinary international terrorist network, totally unprecedented in scale, which carried out massive atrocities all over the world, primarily....well, partly nearby, but not only there. As a conclusion of my essay I would say that the whole world is crazy and very aggressive. It's true that there is no world war at the moment, but there is a kind of a war in the world. In my opinion terrorism is the new war. A war with new weapons, a war which can kill terribly many people during seconds, a war that is sneaking. A war that is about politics, but everyone might get involved even if you are nothing to do with that political idea. And its danger lies behind it. You think that you are not involved. Or are you? "Our alliance must remain tough in the war against global terror; that even though we've had some initial successes, there's still danger for countries which embrace freedom, countries such as ours or Germany, France, Russia or Italy. And as an alliance, we must continue to fight against global terror. We've got to be tough." President George W. Bush Szab� Eszter III/50B group (Tue 4pm class) 2002-11-30 ?? ?? ?? ?? 1 ...read more.