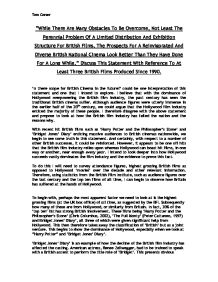 &quot;While There Are Many Obstacles To Be Overcome, Not Least The Perennial Problem Of A Limited Distribution And Exhibition Structure For British Films, The Prospects For A Reinvigorated And Diverse British National Cinema Look Better Than They Have ...

"While There Are Many Obstacles To Be Overcome, Not Least The Perennial Problem Of A Limited Distribution And Exhibition Structure For British Films, The Prospects For A Reinvigorated And Diverse British National Cinema Look Better Than They Have Done For A Long While." Discuss This Statement With Reference To At Least Three British Films Produced Since 1990. 'Is there scope for British Cinema in the future?' could be one interpretation of this statement and one that I intend to explore. I believe that with the dominance of Hollywood overpowering the British film industry, the past century has seen the traditional British cinema suffer. Although audience figures were utterly immense in the earlier half of the 20th century, we could argue that the Hollywood film industry enticed the majority of these people. I therefore disagree with the above statement and propose to look at how the British film industry has failed the nation and the reasons why. With recent hit British films such as 'Harry Potter and the Philosopher's Stone' and 'Bridget Jones' Diary' enticing massive audiences to British cinemas nationwide, we begin to see some truth in this statement. ...read more.

American actress, Renee Zellwegger, had to be trained to speak with a British accent to perform the title role of 'Bridget'. This presents obvious evidence of a decline in the British film industry as the film had to add the expense of importing and training an American actress to star in a British film as opposed to simply using a British actress. So without a doubt, the sheer idea that Britain's film industry is following a successful path is embarrassingly quashed by these figures. For instance, 'Titanic' (James Cameron, 1997) is classed as the highest grossing film in the UK box office of all time. British actors/actresses aside, this film can only be classed as American. The funding (something in the region of $200 million, a figure way out of reach of the British industry), the production team, special effects, location and so on, have all originated from America. In addition, the fact that this film is based around a renowned and true British story, further dents the nation's film industry for not producing the film before Hollywood. ...read more.

and 'Jurassic Park' (Steven Spielberg, 1993) all mainly owe their success to the high level of special effects used in them. Subsequently 'Jurassic Park' was listed 6th on the all time top ten films at the UK box office. Of course, their success could also be down to the director, actors or other factors, which draw people to the cinema, yet we see the overriding point that all of these 'special effects successes' are American. 'Bend it Like Beckham' (Gurinder Chadha, 2002) grossed �2 million in its first weekend. I personally think that if Britain's film industry is to be 'reinvigorated' it needs to take on the American approach, namely large-scale funding, marketing and distribution of films. America produces numerous films every year, some of which fail, expected as not all films are successful. This may be seen as a gamble, yet Hollywood continuously remains financially sound and scoops immense profits annually. So this idea may be gambling with British taxpayer's money but in the long run profits can begin to heighten. So unless these techniques are taken on board, this country cannot even begin to compare with the US, even in the foreseeable future. Tom Corser ...read more.