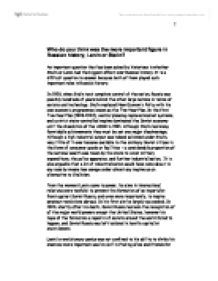 Who do you think was the more important figure in Russian history, Lenin or Stalin? An important question that has been asked by historians is whether Stalin or Lenin had the biggest effect over Russian history. It is a difficult question to answer because both of them played such important roles in Russia's history: In 1928, when Stalin took complete control of the nation, Russia was possibly hundreds of years behind the other large nations in terms of society and technology. Stalin replaced New Economic Policy with his own economic programmes known as the Five-Year Plan. In the first Five-Year Plan (1928-1932), central planning replaced market systems, and a strict state-controlled regime dominated the Soviet economy until the dissolution of the USSR in 1991. ...read more.

In his first aim he largely succeeded. In 1924, shortly after his death, Soviet Russia had won the recognition of all the major world powers except the United States, however his hope of the formation a republic of soviets around the world failed to happen, and Soviet Russia was left isolated in hostile capitalist encirclement. Lenin's revolutionary genius was not confined to his ability to divide his enemies; more important was his skill in finding allies and friends for the lowest classes of Russia. Stalin's political ability went beyond tactics, as he was able to channel massive social classes, both to meet his economic goals and also to expand his personal power. ...read more.

Stalin has arguably made a greater impact on the lives of more individuals than any other figure in history. But the evaluation of his overall achievement still remains, decades after his death, a highly controversial matter. Historians have not yet reached any definitive agreement on the worth of his accomplishments, and it is unlikely that they ever will. Although I think that Lenin was the greatest revolutionist, I believe that Stalin should have the title as 'most important man in Russian history'. I say this because although Lenin led the way for Stalin and broke Russia free from tsarist command I feel that without Stalin's severe totalitarianism leadership Russia wouldn't be that nation that it is today. 1 ...read more.