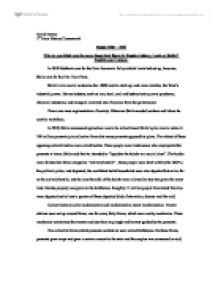 Who do you think was the more important figure in Russian history, Lenin or Stalin? Explain your answer.

David Norton 5th Form History Coursework Russia 1905 - 1941 Who do you think was the more important figure in Russian history, Lenin or Stalin? Explain your answer. In 1928 Bukharin was for the New Economic Policy which Lenin had set up, however, Stalin was for the Five Year Plans. Stalin's aim was to modernise the USSR and to catch up, and even overtake, the West's industrial power. Heavy industry, such as iron, steel, coal and hydroelectric power producers, chemical industries, and transport, received lots of income from the government. There was mass regimentation of society. Wherever Stalin needed workers and labour he sent his workforce. In 1929, Stalin announced agriculture was to be collectivised. Stalin's plan was to make all 100 million peasants join collective farms but many peasants opposed his plans. ...read more.

The collective farms which peasants worked on were called Kolkhozes. On these farms, peasants grew crops and gave a certain amount to the state and the surplus was consumed or sold. Another collective farm was a Sovkhoz. These farms were under pressure to produce crops all year round, whatever the weather, and they got paid a certain amount of money for doing so. One of Stalin's favourite workers was a man called Stakhanov who was a giant miner who mined huge amounts of coal compared to other miners. Stalin used him in propaganda, as he wanted all the workers to be like Stakhanov. Soon Stalin had a new slogan: "Five in Four". What Stalin meant by this was that the Five Year Plans could be completed in four years. This is what Stalin hoped for. ...read more.

However, when Lenin set up the New Economic Policy he did not intend to keep it for long for he set up the GOSPLAN in 1921. This was the State Planning Department and Lenin meant for this to take over from the New Economic Policy when it was no longer needed. Also, Stalin considered all of his actions to be what Lenin wanted. Stalin always felt he was doing what Lenin wanted to do. It is hard to say who was the more important figure in Russian history because Lenin made all the plans for what he wanted for the country but Stalin carried out these plans and made Russia a better country. However, Stalin's paranoia got the better of him and led him to murder a large portion of his army in the Purges. I think Stalin was the more important figure as he improved Russia, even if it was under Lenin's plans. ...read more.