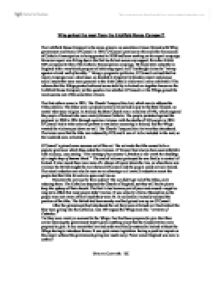 Who gained the most from the Lichfield House Compact

Who gained the most from the Lichfield House Compact? The Lichfield House Compact is the name given to an unwritten alliance formed with Whig government and Daniel O'Connell in 1833. O'Connell previous to this and after his success of Catholic Emancipation in being granted in 1829 had been working on his repeal campaign. However repeal was failing due to the fact he did not secure any support from the British MPs compared to that of his Catholic Emancipation campaign. He faced total antipathy in England with a very bleak prospect of achieving repeal as O'Tuaithaigh claims he "ran up against a brick wall of hostility." Being a pragmatic politician, O'Connell realised that his repeal campaign was a dead issue, so decided to temporarily abandon repeal and pursue social issues that were more personal to the Irish Catholic and overall more achievable! The reforms that the Whigs granted achieved some stability in Ireland are together known as the Lichfield House Compact, yet the question lies whether O'Connell or the Whigs gained the most success out of this unwritten alliance. The first reform came in 1833, The Church Temporalities Act, which was to address the Tithe problem. The tithes were a payment every civilian had to pay to the State Church, no matter what your religion. In Ireland, the State Church was a minority of 14%, which angered the people of Ireland who were mainly Roman Catholic. ...read more.

However O'Connell gained a lot less more than he gained. The conditions in the workhouses were terrible with them similar or worse to those in England which were nicknamed the "Whig Bastilles". Once in, you were categorized due to your age, and gender. Thus families all the time were being broken up without seeing each other until you came out, or even never at times, with many deaths occurring throughout them due to diseases and other factors. One of the terms for a civilian to enter the workhouse meant that you had to give up your source of income. For most people in Ireland at this time, their source of income was their plot of land - where they grew their food, cared for their livestock on, and lived on in their home! They had to give up all of this, which meant that when they came back out they had absolutely nothing to come back too! Many seen the government didn't wanting families planting their potatoes, going into the workhouse, and then coming back out to the grown potatoes rid to be harvested which gave work, and food to these people who were once working for them! It was once commented that the workhouses were "An English solution to an Irish problem." This was not what O'Connell had hoped for, with the Great Famine on its way! The Poor Rate term actually encouraged eviction! Many people at this time could not afford their rent. ...read more.

It covered them just like the Poor Law, in that they could claim they were giving Catholics a foothold in politics and showed the concessions they were making. O'Connell would have seen as Drummond's reforms as the only ones worth respect. Thomas Drummond was the Irish Under-Secretary. He created a new spirit of fairness and impartiality to the administration of Ireland and introduced further reforms to address the Irish grievances. They began for the first time to give Catholics a fair share of government jobs. They were appointed to high offices in the Irish judiciary and the Castle. A new national police force was established, with Catholics encouraged to join. The political powers of the extremist Protestant Orange Order were curbed - they were prevented from holding public procession which had often been the cause of riots. Drummond also refused to allow the army or police to be used to collect tithes, or evict tenants. When landlords complained he stated "Property had its duties as well as its rights." In conclusion Liz Curtis summed up O'Connell's side of the Lichfield House Compact as "six wasted years." He had gained very little out of the reforms the Whigs had made, and it hadn't addressed many of the grievances, in most cases making them worse! O'Connell now had to start back in to his reform campaign as he had realised he had literally 'wasted' the 6 years, while he could have successfully achieved repeal. For the English they came out on the better side. They had gained a lot, without having to give much away! ?? ?? ?? ?? Shauna Connolly 13C ...read more.