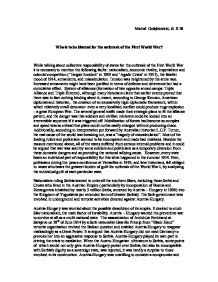 Who is to be blamed for the outbreak of the First World War?

Michal Golebiowski, kl. II IB Who is to be blamed for the outbreak of the First World War? While talking about collective responsibility of states for the outbreak of the First World War it is necessary to mention the following faults: nationalism, economic rivalry, imperialism and colonial competition ('Tangier Incident' in 1905 and 'Agadir Crisis' in 1911), the fatalist mood of 1914, armaments, and miscalculation. Tension was heightened by the arms race. Increased armaments might have been justified in terms of defence and deterrence but had a cumulative effect. System of alliances (formation of two opposite armed camps: Triple Alliance and Triple Entente) , although many historians claim that earlier events proved that there was in fact nothing binding about it, meant, according to George Kennan, American diplomat and historian, the creation of an excessively rigid diplomatic framework, within which relatively small detonator- even a very localized conflict could produce huge explosion - a great European War. The several general staffs made their strategic plans to fit the alliance pattern, and the danger was that soldiers and civilian ministers could be locked into an irreversible sequence if it was triggered off. Mobilisation of forces had become so complex and speed was so critical that plans could not be easily changed without producing chaos. ...read more.

Britain would be therefore justified to undertake diplomatic actions leading to putting strains on German expansionist policy in order to protect her own predominance in the world, so that any movement of encircled Germany, even with a significance of a mere gesture in support of her Austro- Hungarian allies in military actions in the Balkans, must have ended with war waged against her two greatest neighbours: Russia and France. By isolating Germany and sending inconsistent signals, Britain was also at least partially responsible for wrong conclusions, relating to a probable scale of European conflict that was to break out, of the German leaders. In 1961 a German historian, Fritz Fischer in his book "German Aims in the First World War" argued that Germany had to bear the main responsibility for the outbreak of the war. Fischer's main theses were: 1) that the German government under the Kaiser's direction deemed a European war inevitable, prepared for war, and decided to seize the next opportunity to start it. Fischer points out the expansive aims of the industry and Junkers; 2) that the German government and general staff precipitated an escalation of the Austro-Serb crisis in order to launch what they considered a preventive strike against Russia and France. Germany, after her failure in taking control over Morocco, might have come to feel that she could expand her overseas empire only after she had destroyed the European Balance of Powers. ...read more.

Herwig, the editors of a collection of essays "The Origins of World War I" (2002), accept the opinion that ultimate responsibility for war rests with Germany and that her outbreak was deliberately provoked by German leaders. However, particularly in the light of aggressive Austro-Hungarian moves and misleading diplomacy of Great Britain it would be wrong to blame Germany alone. The more closely we study the origins of the war the more clearly the general truth emerges that no state was entirely free from blame. All had their national policies and ambitions which could not but clash fatally some day. For many of the states, to be sure, a European War might seem to hold out the possibility of achieving various desired advantages: for Serbia, the achievement of national unity for all Serbs; for Austria, the revival of her waning prestige as a Great Power, and the checking of nationalistic tendencies which threatened her very existence; for Russia, the accomplishment of her historic mission of the Slav leader; for France, the recovery of Alsace-Lorraine and the ending of the German menace; and for England, the destruction of the German naval and economical danger. Distrust between different European states was at a peak and ruling circles were dominated by the idea that war was inevitable. Each state government accused the other of aggressive intentions; each accepted the risk of a war and all of the states were not willing to abandon their conflicting interests. ...read more.