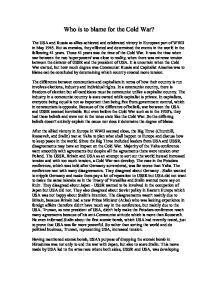 Who is to blame for the Cold War?

Who is to blame for the Cold War? The USA and Russia as allies achieved and celebrated victory in European part of WWII in May 1945. But as enemies, they effected and determined the events in the world in the following 41 years. Those 41 years was the time of the Cold War. It was the time when war between the two 'superpowers' was close to reality, when there was extreme tension between the dictator of USSR and the president of USA. It is uncertain when the Cold War started, but how much degree was Communist Russia and Capitalist America was to blame can be concluded by determining which country created more tension. The difference between communism and capitalism in terms of how their country is run involves elections, industry and individual rights. In a communist country, there is freedom of election but all candidates must be communist unlike a capitalist country. The industry in a communist country is state owned while capitalist is private. In capitalism, everyone being equal is not as important than being free from government control, which in communism is opposite. Because of the difference of beliefs, war between the USA and USSR seemed inevitable. But even before the Cold War such as in the 1920's, they had these beliefs and were not in the tense state like the Cold War. ...read more.

This move made by USA led to the arms race where both sides, USSR and USA, was developing Nuclear weapons, the weapons to be used when the Cold War became 'Hot'. At this period of the Cold War, there was enormous tension not only in politicians but also in civilians, who lived on a daily-basis with a fear that their enemy may launch a nuclear weapon upon them. Stalin, having his Soviet troops positioned in all over Eastern Europe, was able to control the countries without much the capitalist nations interfering. He made USA and Britain angry by setting up communist governments in those liberated countries without having free elections on what governments the country should have, which broke the agreement made in Yalta. This is obviously a good way to start a Cold War, which is part of the USSR's share for the blame. Also Stalin's attempt to further takeover Eastern Europe including Greece increased tension to develop into a Cold War. However, USA's reaction to this increased tension as well. Truman saw this takeover as a spread of communism and stepped in to stop this. The first action Truman took was in Greece where he tried to resists Stalin's takeover. This reaction was the start of the new era of America's political attitude, otherwise known as 'The Truman Doctrine'. ...read more.

During this blockade, USA and other capitalist powers formed NATO. When most of Western Europe and USA working together, this means Europe officially has two separate hostile groups, the Eastern Communist countries and members of NATO consisting of Western powers. This diversity would have increased tension. USA, as part of the establishment of NATO, can be blamed for this further increase of tension. Looking at an overview of the events in the early years of the Cold War (1945-1949) there appears a pattern of how the events came about. The pattern - every communist action met with a capitalist reaction. USSR attempting to takeover Greece met with USA trying to resist this takeover. When USSR took over Czechoslovakia, USA reacted by introducing Marshall Aid. When USSR blocked West Berlin links to West Europe, USA supplied West Berlin by using aircraft. When USSR set up communist governments without free elections in liberated countries, USA developed a 'get tough' attitude supported by the Containment policy and the Truman Doctrine. When USA showed off its atomic bomb, USSR too started to develop weapons - the arms race period. So the blame for the Cold War could be USSR for its action. Or the blame for the Cold War could be USA for its reaction. But the blame should really be put upon both USSR and USA equally, since it takes at least two enemies for a war to exist which in this case, is called the COLD WAR. ...read more.